There was no talk about loyalty to President Donald Trump after it was a main theme of the gubernatorial primary, and it remains to be seen how much candidates will focus on Trump in the general election in the state he won by 26 percentage points in 2016. Lee and Blackburn have competitive, open races.

Alexander, for one, spoke generally about what Blackburn’s race and keeping Republican control of the Senate mean for Tennessee. Both breezed through their primaries. The November contest could swing a 51-49 GOP Senate majority.

Blackburn, a strong ally of Trump, didn’t mention the president at the news conference and said senators are supposed to address concerns that “Tennesseans bring to us.” Alexander mentioned several bills that became law and said Blackburn helped them through the House, including legislation for increased medical research into cancer and other diseases, and a bill to make it easier for volunteers to help storm victims.

Blackburn said she will be campaigning with Lee, who topped his three leading opponents by more than 12 percentage points. Lee spent $7 million through late July, a third of what Boyd shelled out and half of what Black spent. He found a niche down the homestretch by not overtly making attacks while Black and Boyd were ensnared in a nasty ad war.

“Let me first say how deeply grateful I am to the three of you for being here,” Lee said to his former opponents.

The Democratic nominees, Bredesen and Dean, are both touting themselves as moderates and independent thinkers who say they would work across party lines. Both would need to peel off support from moderate Republicans and independents to be successful. 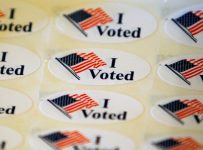