CHENNAI: The ruling AIADMK in Tamil Nadu, which has for long attacked the DMK for dynastic politics, has drawn criticism for nominating sons of its leaders including O Panneerselvam for the April 18 Lok Sabha polls.

Among DMK’s 20 candidates, six are children of prominent leaders while the AIADMK has allotted four of the 20 seats to wards of party leaders.

Both the DMK and the AIADMK, however, contend that only hardwork and loyalty of the candidates have been recognised and they cannot be denied ticket just because of the stature of their kin.

Eyebrows were raised when AIADMK coordinator and Deputy Chief Minister Panneerselvam’s son Ravindranathkumar was given a ticket from Theni constituency but the party stoutly defended the candidature, saying he has been rewarded for loyalty and hardwork.

Though both the Dravidian majors are facing questions on family politics, the ruling party especially finds itself in the dock since its late leader J Jayalalithaa had often used it to target her party’s archrival DMK.

The two parties are contesting from 20 seats each, after having allotted the rest 19 seats among their allies. Elections to 39 Lok Sabha seats in Tamil Nadu are scheduled on April 18 in a single phase polling.

Stalin is former Deputy Chief Minister while Alagiri, since expelled from DMK in 2014, was a minister in the Congress-led UPA at the Centre and Kanimozhi has been a Rajya Sabha member since 2007.

T R B Raja and IP Senthilkumar are MLAs in the present state Assembly.

Raja is son of senior DMK leader TR Baalu, who is fighting the Lok Sabha polls from Sriperumbudur, while former Minister and sitting legislator I Periyasamy is Senthilkumar’s father.

Among DMK’s 20 candidates for the April 18 polls, six are children of prominent leaders including Kanimozhi and former Union Minister Dayanidhi Maran, the grandnephew of Karunanidhi. He was MP between 2004 and 2014 and a Minister in UPA I and II.

Kanimozhi, however, justified the party move, saying the selected candidates were not some outsiders.

“Only those who have been working for the party for long have been given a seat, not that someone has been brought from outside,” she said.

There was no need to deny ticket to somebody just because the person happened to be a political heir, she added.

The spotlight, however, has turned on the AIADMK this time, with four of the 20 seats allotted to wards of party leaders.

Sitting MP Dr J Jayavardhan has been re-nominated, while former Rajya Sabha member PH Manoj Pandian has been given a Lok Sabha ticket.

Jayakumar is also a state minister while Pandian is a former Assembly Speaker.

Rajsathyan is son of VV Rajan Chellappa, a former AIADMK Mayor and the party’s sitting MLA from Madurai North.

The 36 year-old also leads the party’s IT Wing.

AIADMK spokesperson RM Babu Murugavel denied any dynastic politics in the party’s rank and file, saying loyalty has been rewarded.

He said Jayavardhan and Manoj Pandian were in the past nominated by Jayalalithaa herself for Lok Sabha and Rajya Sabha respectively.

Ravindranathkumar was earlier Secretary of a party wing even “during the days of Amma,” he said, adding, the former was last year appointed the as the head of the Theni district unit of the Puratchi Thalaivi Amma Peravai, a forum named after Jayalalithaa.

Ravindranathkumar said he had been involved in party work for the last 21 years and denied he was taking advantage of his father’s position.

“I am doing party work since I was 18. Now I am 39 years old. I have visited every town and village in Theni. I am keen on doing public service and the (AIADMK) coordinator (Panneerselvam) has said efficiency and loyalty to the party are key for a post,” he said. 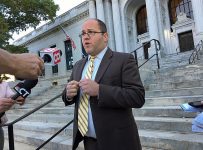