on Thursday became the first U.S. company to surpass $1 trillion in market value, underscoring the iPhone maker’s explosive growth and its role in the technology industry’s ascent to the forefront of the global economy and markets.

Shares of the world’s most valuable public company climbed above $207.04, making it worth $1 trillion overall. The stock has risen more than 21% so far this year, its latest rally coming after it reported strong revenue and profit gains Tuesday as demand for high-price iPhones remained resilient and sales from the app store and other services hit all-time highs.

a product visionary who helped revive the company from a death spiral in the late 1990s. His successor,

has turned Apple into a cash-generating giant by pushing its existing products to prominence in China and cultivating its fast-growing services business – moves that have helped stave off concerns about the absence of a new, blockbuster device.

“We’ve heard a number of times since Mr. Jobs died that the company was going to slip and fall, but they’ve continued to execute,” said Greg Hersch, founder of New York City-based Florence Capital Advisors, which has more than $400 million under management and counts Apple among its largest holdings.

Along the way, Apple has led a broader tech boom that has made a handful of giant companies central in people’s daily lives and investment portfolios. The five most valuable companies–Apple,

–all recently hailed from tech and internet firms, a level of industry dominance rare in recent markets history. Those five collectively accounted for nearly 15% of the total value of the S&P 500 as of last month, according to Ned Davis Research.

The iPhone, and the smartphone era it birthed, helped lift other tech giants–and disrupted many other businesses. Smartphones drive mobile advertising businesses at Google and Facebook, and account for an increasing share of the e-commerce transactions lifting Amazon.

Technology’s ubiquity, and the industry’s swelling wealth and clout, also have triggered growing criticism and regulatory scrutiny–one of several factors that could undermine the boom. This year, Apple confronted investor pressure to address the public health risks of rising youth smartphone addiction. Facebook and Google were grilled by U.S. lawmakers over data privacy. Amazon’s business practices were slammed by President

Some money managers worry that a few highflying firms are powering the broader market, leaving stocks susceptible to a painful downturn if the rally ends.

Apple, founded as an upstart maker of personal computers in 1976, first took the crown as the largest company in August 2011 when it edged out

, signifying tech’s displacement of energy as market king. At the time, Apple was valued at roughly $343 billion.

Mr. Jobs died a few months later, having transformed the company from a niche computer company to a global electronics powerhouse. But Apple kept rising, cementing its market-cap lead in August 2013 and holding it consistently since then except for a few days in 2016 when Alphabet was bigger.

More recently, Apple has had to hold off Amazon, which was worth just a third of Apple’s value in 2011 but whose stock recently has surged as it shows it can grow profit as well as sales. Amazon was worth about $875 billion on Thursday, and Alphabet was worth about $850 billion. Microsoft, at more than $800 billion, isn’t far behind.

The calculation of Apple’s market value is based on the company’s diluted share count as of July 20. Share counts fluctuate day by day based on factors like stock buybacks, but generally aren’t disclosed more than a few times per year.

Apple isn’t the world’s first company to claim the $1 trillion title. In 2007,

market cap surpassed that level by some measures, though the Chinese oil and gas producer’s complicated corporate structure kept most of its shares locked up in government hands, making it difficult to determine the firm’s actual value.

Outside of the public markets, there is Saudi Arabian Oil Co., the state-owned oil company. It weighed an initial public offering that could value the business at as much as $2 trillion. The plan has stalled however, and the actual value of the company, known as Saudi Aramco, isn’t clear.

Apple’s ascent is especially remarkable since its survival as a company was in doubt just over two decades ago. It lost $2 billion over two years in the mid-1990s, weighed a sale to Sun Microsystems, and churned through three CEOs in four years before bringing back Mr. Jobs. He revived the business by thinning Apple’s product lineup and spearheading a trio of hits: the iPod, iPhone and iPad.

Mr. Cook, who took over in 2011, broadened the iPhone’s reach, helping it become one of the best-selling products in history, with more than 1.4 billion devices sold. Huge numbers were sold in China, a market that exploded in 2015 after Apple signed a deal with the largest mobile operator. China now accounts for a fifth of Apple’s sales.

The iPhone also underpinned Apple’s services sales, which Mr. Cook set the goal of doubling in four years to $50 billion by 2020. On Tuesday, he said Apple is on track to hit that goal thanks to accelerating subscription sales, growing transactions on Apple Pay and other factors.

The iPhone X, which launched last November, has delivered minimal unit growth, but its $999 price tag has lifted total sales by raising average iPhone selling prices 15% higher to $750 in the nine months ended in June. In May, Apple announced it would add $100 billion in share repurchases, the largest ever announced by a company.

Unlike some peers that trade at lofty multiples, Apple is still relatively cheap based on its current performance. Some investors worry about the escalating trade dispute between the U.S. and China however. Apple acknowledged this week that those tensions could increase its manufacturing costs and dampen product sales.

Longer term, investors worry about Apple’s ability to launch another transformational product like the iPhone or iPad. Its smartwatch, which made its debut in 2015, has made Apple the world’s largest watch company by sales but hasn’t delivered the type of sales other hit products.

“One of the things that has always concerned us is the concentration in the iPhone,” said Trip Miller, managing partner at Gullane Capital Partners, which owns the stock. “But I don’t think there is a risk that there is some gee whiz product in the next 12 to 24 months that is going to unseat the iPhone as the king.”

Write to Tripp Mickle at Tripp.Mickle@wsj.com and Amrith Ramkumar at amrith.ramkumar@wsj.com 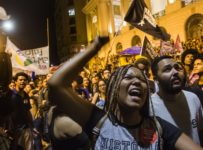