Australia is facing a massive bill from unprecedented, deadly fires that have burned an area bigger than Belgium.

Insurers have received claims worth A$240m (£126m ; $165m) since October, and they expect the number will grow significantly.

Medical bills from the fires and smoke haze could also run into the hundreds of millions.

And one analysis suggests disruptions caused by the fire and smoke haze could cost Sydney as much as A$50m a day.

The bushfires have killed eight people and destroyed 700 homes.

There appears to be no reprieve in sight, as temperatures are expected to hit 40C on the weekend, stoking fears of more fires.

The director of the Fire Centre Research Hub at the University of Tasmania, Prof David Bowman, has labelled them “absolutely transformative and unprecedented” and said they underscored a need for governments to rethink how they approach fires.

Prof Bowman told the BBC the health bills from the current fires will run into the hundreds of millions of dollars.

He said Tasmania faced A$25m in health costs from bushfires and smoke haze at the beginning of 2019, but that the current crisis was on a much bigger scale. 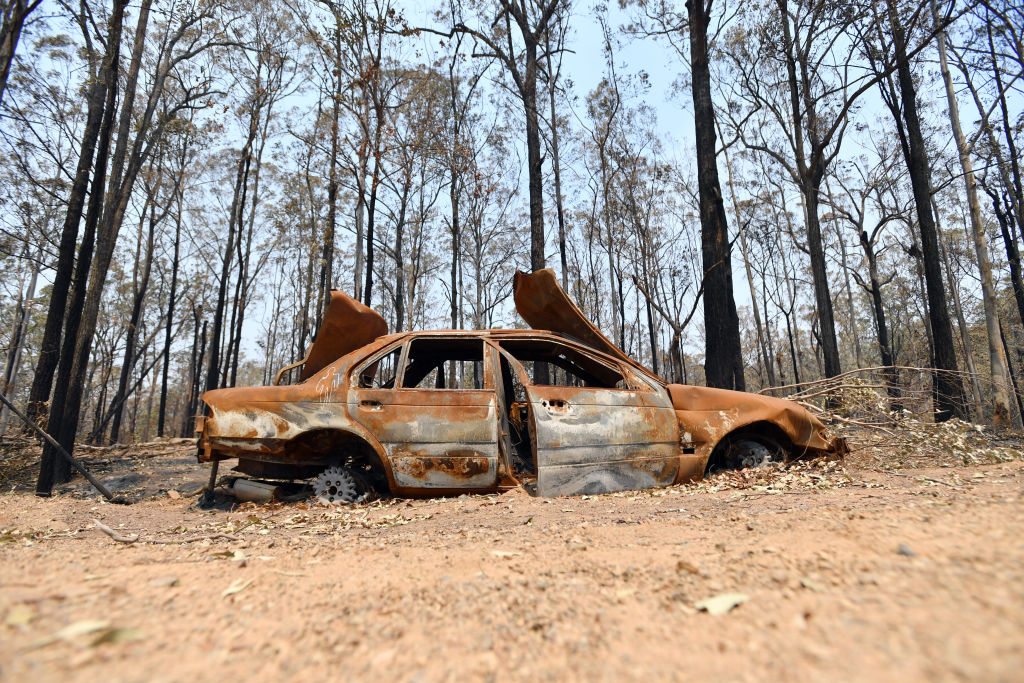 “It’s pretty much a third of the Australian population that has been impacted, with prolonged, episodic exposure and sometimes extreme health impacts,” he said.

“But the broader social impact of the smoke and the loss of productivity is anybody’s guess.”

Up to A$50m a day in disruption

Consulting firm SGS Economics estimates that Sydney generates roughly A$1.2bn a day worth of economic activity, but the haze is causing between A$12m and A$50m worth of daily disruption.

Those costs are due to people missing work because they feel unwell, disruption to transport services, and workers abandoning their desks because the haze tripped the fire alarms.

The haze had, at least anecdotally, a clear effect on the hospitality sector as well.

“If I’m running a bar and I’m on the waterfront, I’m not selling any cocktails, because there’s no-one there,” said Terry Rawnsley who oversees social analysis for SGS Economics.

The direct cost of fighting the fires could blow out dramatically too, especially if there’s a reliance on aviation.

But Mr Rawnsley said aviation costs need to be weighed against other priorities.

“Flying in another water bomber’s going to cost sixty million bucks, but you’re going to lose that every day in the economy,” he said.

Australia has long relied on volunteers to fight fires, largely because there’s a need for a surge of additional resources during emergencies, but also because it’s extremely expensive to deploy paid firefighters over such large areas.

The New South Wales Rural Fire Service is the world’s largest volunteer fire service, with about 70,000 volunteers, and Victoria’s Country Fire Authority has about half that number.

But Prof Bowman thinks this year’s fires are so extreme that they could force the authorities to rethink that model.

“It’s not realistic anymore to think you can have volunteer brigades working for a protracted season,” he said.

Prime Minister Scott Morrison has pledged an additional A$11m for the National Aerial Firefighting Centre, but dismissed calls for more support for volunteer.

Both experts say there’s a need to improve prevention strategies, which tend to be more cost effective.

“The climate has changed, and now it’s really about how we manage. How do we adapt and evolve?” said Mr Rawnsley.

An analysis by SGS, using insurance industry statistics, found that more than 1.6m people live in communities in New South Wales and Victoria that are are “high to extreme risk of bushfire”.

Even though the Black Saturday bushfires killed 173 people in 2008, more people have moved into fire prone areas since then.

It’s still early in the bushfire season, which makes it impossible to know what other bills Australia’s government agencies and the community might face.

Already, the Insurance Council of Australia says it has received claims worth A$240m since October, which is well in excess of claims in the past few years.

That figures includes 2,306 claims, worth an estimated A$182.6m, from fires on the New South Wales Mid-North Coast and Queensland.

Previous fire tragedies in Australia have run into the billions.

A royal commission called after the Black Saturday fires in 2008 put the cost at A$4.4bn.

That included insurance claims, which the Insurance Council of Australia said totalled about A$1.2bn.