Bitcoin is making its case an uncorrelated, safe-haven asset while mainstream markets tumble.

The world’s largest cryptpcurrency was up 15 percent on Monday, hitting a high of $7,946.01, according to data from industry site CoinDesk. Meanwhile, U.S. equity markets were headed in the other direction. The Dow Jones Industrial Average fell as much as 696 points Monday and was on track for its biggest one-day loss since January.

The sharp decline for stocks came after news that China would raise tariffs on roughly $60 billion of U.S. goods in an ongoing trade war between the world’s largest economies. Stocks in mainland China also dragged lower Monday while the Chinese yuan reached a four-month low this week.

“If you were in China and you wanted to diversify, it would seem logical that Bitcoin would be a short term alternative,” Brenner said in a note to clients Monday. “While we do not see the direct flows of who is buying bitcoin, we can see that the bid for bitcoin in this latest run has coincided with a big down tick in the value of the Chinese Yuan versus the dollar.”

The cryptocurrency’s volatility has largely barred it from becoming a useful payment method. Instead, bitcoin has been billed as a store of value, or “digital gold.” That safe-haven use-case seemed unlikely in 2018 after it ended the year down more than 73 percent. 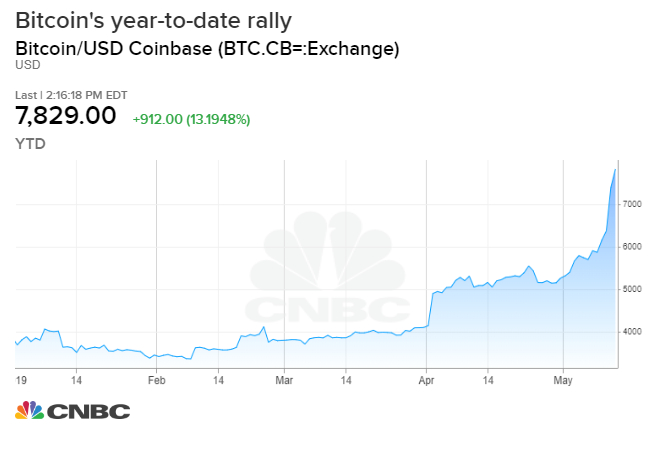 Bitcoin prices have yet to rebound anywhere near an all-time high near $20,000, which was driven by a stampede of retail investors. But this year, the cryptocurrency has more than doubled after starting the year around $3,700. The S&P 500 is up about 12 percent in the same time period.

Michael Moro, CEO of Genesis Global Trading, also said bitcoin’s rally was thanks to key technical resistance levels being broken. It climbed above a key $6,000 level last week for the first time since November. Investors had expected “much more resistance on the way up” to $6,200, Moro said. The next key level to watch is $10,000, he said.

Bitcoin may also emerge alternative asset in today’s low interest rate environment, Moro said. Similar to the appeal of high-growth technology stocks, investors may look to bitcoin as a riskier, but faster-growing bet as cash continues to earn next to nothing.

“If you look back at 2018 when the Fed was raising interest rates, bitcoin was not performing well,” Moro said. “I think that’s what we’ve seen with bitcoin the last two months — the Fed signaling we’re cutting rates.”

Gold, a more established safe-haven trade, rose as global markets sold off this week. But its rally was less exuberant than bitcoin’s. The precious metal was up 1 percent on Monday.

Still, the decade-old bitcoin market is facing plenty of critics and headwinds as it matures. Last week, hackers stole 7,000 bitcoin, worth more than $40 million, from Binance, one of the world’s largest cryptocurrency exchanges. A study published by Bitwise in March showed that 95 percent of bitcoin spot trading is faked by unregulated exchanges — echoing concerns by regulators that nascent markets are ripe for manipulation.

— With reporting by Patti Domm.