In a separate letter to clients, the BlackRock executive committee said it would publish the proportion of assets under management that is currently aligned to net-zero and set a target for the rest. BlackRock is the world’s largest investment manager, overseeing $8 trillion in assets.

“We appreciate that disclosure can be cumbersome and that the variety of reporting frameworks creates further complexity for companies,” Fink wrote the companies. He noted that he’s been pushing for a move to a single global standard to make disclosures easier and help investors more easily compare companies.

In addition, Fink told CEOs that it’s never been more important for companies to respond to the needs of stakeholders—or constituents other than shareholders. After the pandemic and mass uprisings in support of social justice in 2020, Fink said he expects companies to hire the best talent, and that their disclosures on talent strategy “fully reflect your long-term plans to improve diversity, equity, and inclusion, as appropriate by region. We hold ourselves to this same standard.”

In their letter to clients, the firm’s executive committee said BlackRock would subject issuers to “heightened scrutiny” about whether they’re “adequately prepared” to manage the risks related to the transition to net-zero. The firm will create a “focus universe” of holdings presenting the most significant climate-related risk, including high carbon intensity and insufficient preparation for a net-zero future.

BlackRock also said it will increase the number of votes on shareholder proposals in its stewardship efforts around sustainability. BlackRock has come under fire in the past for talking the talk about fighting climate change, but according to a Morningstar analysis, supporting too few shareholder proposals for U.S. companies to provide climate disclosure reports. At the time, BlackRock said that it voted on many more proposals about climate than Morningstar looked at.

In today’s letter, BlackRock said that where it doesn’t see progress in its focus universe and other companies, it will vote against management of those companies in its index funds, and flag these holdings for divestment in active funds.

It also warned investors not to expect too much immediately. Because the global economy today “is itself carbon intensive, the portfolios of most diversified investors—including the portfolios of BlackRock’s clients in aggregate – remain carbon intensive,” BlackRock wrote. “That cannot and will not change overnight, and BlackRock’s aggregate portfolio will necessarily be subject to the investment decisions of our clients. Nonetheless, there is significant global momentum towards a net zero economy, and BlackRock believes that our clients are best served by being at the forefront of that transition.”

Fink’s January letters to CEOs in portfolio companies and to clients are widely watched, such as in 2018, when he declared that companies couldn’t achieve long-term profits without embracing purpose and considering the needs of a broad range of stakeholders. Last year, the Business Roundtable followed, redefining the purpose of a corporation as one promoting “an economy that serves all Americans.” This week, the World Economic Forum, in a virtual version of its annual meeting at Davos, repeated its commitment to stakeholder capitalism.

In the U.S. today, a third of assets is now managed according to sustainable principles, says U.S. SIF, the trade group for sustainable investment.

In a statement, Gaurav Madan of Friends of the Earth, which is part of the BlackRock’s Big Problem campaign criticizing the firm for not doing enough on climate change, said that it was “encouraging” to see BlackRock willing to remove companies from active funds but BlackRock needs to clarify when it will do so. “Companies that are expanding fossil fuels right now, against all scientific recommendations, should be removed from funds immediately,” Madan said. 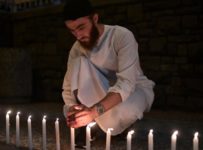