The new X5’s technology upgrades start inside with the iDrive 7 infotainment system. It removes the squarish cards found on the current system and replaces them with a customizable layout that supports two to four individual “widgets.” Like nearly the rest of the automotive world, BMW has reduced the number of taps needed to navigate to the most used features. By surfacing more items at the top level drivers speed less time with their eyes off the road.

In practice, the layout presents items in a way that’s easier to parse with a quick glance. From navigation and media too quick access to the vehicle’s off-road camera (more on that later).

The new iDrive 7 also supports profiles that are saved to the cloud. So if you happen to get into another BMW with the same infotainment system (a rental car for example), you can sign into your account and all your favorite locations, contacts and media are ready to go.

The system still uses both a touchscreen and the wheel found in the center console. The wheel also still supports drawing letters, which for some is easier than trying to tap on the screen while rolling down the highway or sitting in a parking lot.

For the times when you are rolling down the expressway, BMW has placed its updated driver’s assistance package in the X5. The Extended Traffic Jam Assistant is just that: a new way to get through gridlock. The system will track and follow the vehicle ahead of it even after being stopped for a while. No more tapping the accelerator to re-engage the adaptive cruise control.

During my tests, both the adaptive cruise control and lane-keep assist seemed more polished than on other BMWs. But, when you’re only using lane-keep-assist the system was overly aggressive getting you back into your lane if you veered out of your area. BMW says that it’s going to adjust that before the vehicles go on sale.

In addition to keeping you safer on the highway, the updated system also has an automatic lane-changing feature. Which is nice, but I was more impressed with the Reversing Assistant. The feature records the last 55 yards of the car as it pulls into a parking spot and when you need to pull out later, it recreates that action but in reverse. Helpful for tight parking spaces at the mall where backing out can be tricky. This is in addition to the parallel parking feature that’s already on other BMWs.

If a parking lot happens to be down a dirt road (it’s probably not, but you never know), the X5 is ready to take on the challenge. It’s the first X5 with an available off-road package. BMW has four modes: Snow, Gravel, Sand and Rocks (for heavy terrain). I got a chance to take the X5 off-road somewhere in Georgia. The SUV handled itself admirably over ruts and rocks and down hills. Descents were a breeze thanks to computer-controlled brake-by-wire stopping.

The new tech also extends to offroading with new infotainment features: an orientation screen showing the tilt of the X5 and an offroad camera. That camera actually helped quite a lot while navigation the trail the automaker had picked for its off-road test. A few times, as I crested a hill, I was unable to see the actual trail. I switched the screen to the off-road camera and the trail appeared on the center display, along with the rocks, ruts and tree trunks I wanted to avoid.

It’s highly unlikely most X5 drivers will ever take advantage of the new SUV’s off-road capabilities, but for the small percentage that actually need to leave the asphalt on a regular basis, during my tests, it looks like the X5 can handle most of what you’ll throw at it.

On the actual road, the X5 xDrive 40i I drove was quick for its size. The V6 pushes out 335 horsepower and, according to BMW, will go from zero to 60 in 5.3 seconds. The V8 powered xDrive 50i (starting at $75,750) will do the same thing in 4.6 seconds. Both use an eight-speed Steptronic transmission that’s incredibly smooth.

Around corners, BMW’s electronically controlled suspension makes you feel like you’re driving something lower to the ground. The dampeners also produce a very smooth ride — which is why people buy a luxury SUV in the first place. That suspension also adjusts itself for towing and when a tire is low. The vehicle will actually reduce the weight going to a nearly flat tire.

While the tech is new, the interior is just a slight evolution of what’s already found in current BMWs. Which is fine, the automaker’s cabins exude luxury without feeling too ostentatious. That is, except for the new crystal gear shift. BMW took a page out of Volvo’s book and fancied up the transmission control. It’s even got an X engraved on the inside. It’s nice, but not as nice as the heated and cooled cup holders. I prefer beverages served at their intended temperature over a see-through gear shift. But that’s just me.

BMW threw everything at the X5 and way more than can (or should) be listed in a review (USB-C ports, optional third-row seating, unlocking the car with an Android phone, a camera that makes sure you’re paying attention/not tired, etc) of the car. The result could have been a mess of new features mucking up what makes the X5 a big seller for the automaker. Instead, BMW enhanced an already solid SUV and made it better. Oh, and did I mention, you can take it off-road? 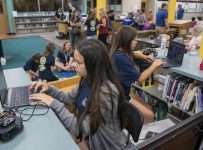