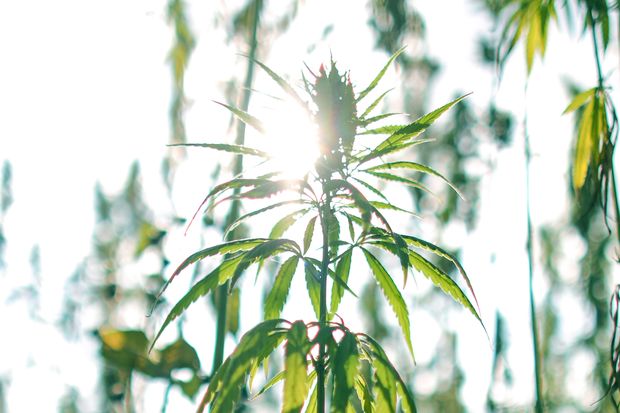 Sun shines behind plants growing in a cannabis field in Naundorf, eastern Germany, on September 19, 2018. – The Mariplant company, a subsidiary of Canadian producer Maricann, cultivates the legal medical cannabis on around 170 hectares to gain the cannabidiol substance. (Photo by Jan Woitas / dpa / AFP) / Germany OUT (Photo credit should read JAN WOITAS/AFP/Getty Images)


Now that hemp is legal, analysts at Cowen & Co. expect the plant will grow into a $16 billion opportunity for companies like Canopy Growth Holdings (ticker:CGC),
Tilray

(TPB)—all stocks that Cowen already rates as Outperform. The broker has led the way among U.S. firms in covering cannabis, and Monday morning Cowen put out a 100-page report on hemp by 11 of its analysts.

Hemp is the cannabis cousin that contains cannabidiol, or CDB, but not the stuff that makes you high, which is THC (or if you must, tetrahydrocannabinol). In December, President Donald Trump signed a bill that removed hemp from federal narcotics prohibitions and allows states to regulate the product. That cleared the way for truckloads of consumer products containing CBD, which has analgesic and relaxing effects, but no buzz.

No other crop in the U.S. offers the return available from CBD, says Cowen agricultural analyst Charlie Neivert. “We would thus expect the country’s two largest crops, corn and soybeans, to lose some acreage to CBD hemp.”

CBD could be this year’s trendy ingredient, showing up initially in cosmetics and toiletries. The Canada-listed startup Green Growth Brands (GGB.Canada) recently announced a deal to open more than 100 kiosks to sell CBD products in
Simon Property

The hemp reforms in the just-signed 2018 Farm Bill were a vindication for the Boulder, Colo.-based CBD oil producer Charlotte’s Web Holdings (CWEB.Canada). But food, beverage, and nutritional supplements will still have to be careful in their marketing of CBD ingredients, says Cowen’s regulatory analyst Eric Assaraf. That’s because the U.S. Food and Drug Administration says it will continue to monitor any health claims made for the stuff.

Hemp offers a U.S. foothold for Canadian cannabis producers who have avoided sales here, where weed remains illegal under federal law. The ink was barely dry on the Farm Bill, when Canopy Growth announced plans to invest over $100 million in a New York state industrial park for making hemp products. And Tilray announced the acquisition of hemp-food producer Manitoba Harvest for $320 million in cash and stock.

Cowen notes that hemp is making a comeback in textiles, too. Four hundred years ago, hemp was grown for use in sails, ropes, and clothes, says Cowen’s John Kernan. Today, outdoorsy brands like Patagonia and prAna promote it, and hemp’s sustainable profile appeals to millennial and Gen Z consumers.