Amid a U.S.-China trade war, the two major stock indexes in China have lost one-quarter of their value from highs this year.

Meanwhile, the U.S.-benchmark, the S&P 500, is inches away from setting a new record and in three weeks will post the longest bull market in its history.

This would seemingly give Donald Trump an upper hand has he maneuvers the trade fight. You can bet that if the U.S. stock market was suffering like that, the president would feel the pressure.

But not so in China.

Analysts are telling their clients to prepare for a long “bumpy” ride in the escalating trade conflict.

“Xi doesn’t give a hoot about the poor people in China. Why do you think they attacked soybeans? Not just because of our farmers, but because he doesn’t care about the pressure from his own people,” he said on CNBC Friday.

In similar fashion, Bank of America Merrill Lynch predicted the trade war will take some time to be resolved.

“At this point, both sides seem to be digging for a long fight,” the firm’s economist Helen Qiao said Friday.

“The gap between US’s demand list and China’s offer list is very large, and the back-and-forth of the negotiations in recent months suggests that neither side would make major concessions,” J.P. Morgan’s China Equity Strategist Haibin Zhu said. “Given the huge gap between the two sides, the outlook remains extremely unclear. Negotiations, even if resumed, will likely involve a bumpy and lengthy process.”

On Monday, China’s Shanghai composite fell 1.3 percent, extending its losing streak to four consecutive trading sessions. The index is down 18 percent so far this year compared with the S&P 500’s 6 percent gain. The Asian country’s benchmark is also down nearly 25 percent from its late January high. 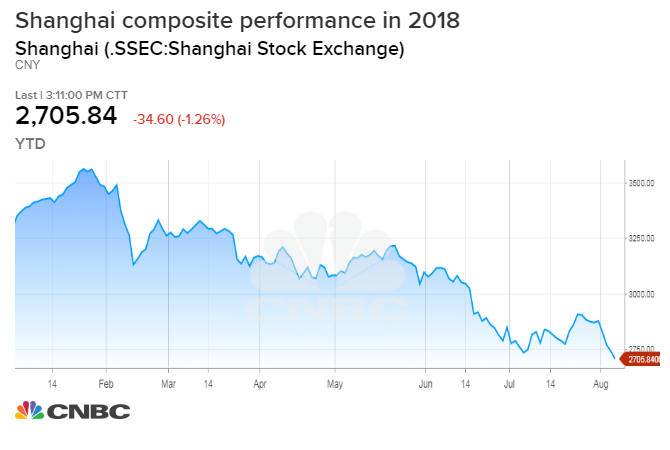 In similar fashion, the Dow Jones Shenzhen index is down about 26 percent year to date. 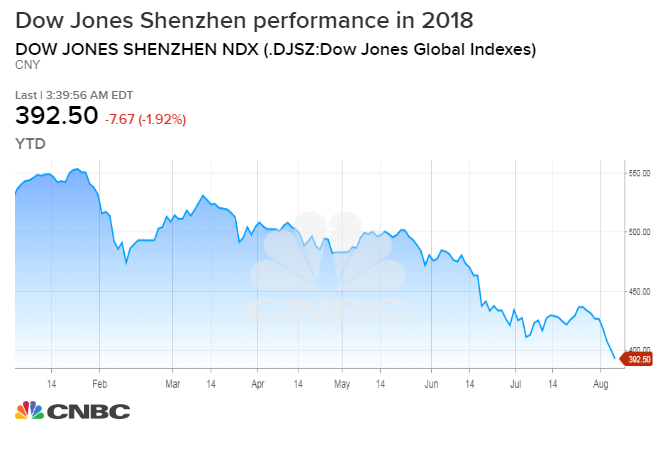 Wells Fargo explained last month that Chinese stocks are falling this year because of the trade war, but also because of worries over the Asian country’s economic growth.

“The broader picture is what could happen to the economies, the bigger economic impact, and if we did go down that path of rapid escalation, that could affect Chinese economic growth which is currently on a path toward slowing,” Peter Donisanu, global market strategist at Wells, said on July 5.

So far in the trade war between the two largest economic powers in the world, the U.S. has slapped tariffs on $34 billion of Chinese products, which China met with retaliatory duties. On Wednesday Trump instructed U.S. Trade Representative Robert Lighthizer to consider raising proposed tariffs on $200 billion in Chinese goods to 25 percent from 10 percent. In response, China said on Friday it is preparing to retaliate with tariffs on about $60 billion worth of U.S. goods.

J.P. Morgan said China’s stock market will not rebound until the trade war is resolved.

“US-China trade tensions remains a big uncertainty and sentiment will likely remain cautious until there is further clarity on that front,” J.P. Morgan’s Zhu said in a note to clients Saturday.

The firm predicts China’s GDP growth rate will slow to 6.3 percent in the second half of 2018 versus 6.8 percent growth in the first half of the year.

Over the weekend President Donald Trump said the U.S. was winning in its trade war with China, citing the dramatic out performance of the domestic stock market versus the Asian country’s market.

“Tariffs are working far better than anyone ever anticipated. China market has dropped 27% in last 4 months, and they are talking to us. Our market is stronger than ever, and will go up dramatically when these horrible Trade Deals are successfully renegotiated. America First,” Trump said on Twitter Saturday.

It is not clear which Chinese index the President was citing for his 27 percent drop over the last four months comment.