Recent weeks were eventful in U.S.-China relations, to put it mildly. Spies were allegedly uncovered, consulates were closed after some resistance, TikTok and WeChat are being banned in the United States and China’s fighter jets flew over the Taiwan Strait when Health and Human Services Secretary Alex Azar made the highest-profile visit by a U.S. official to the island in over four decades. All of this on top of a pandemic and worsening trade ties. While some may debate whether this is the beginning of a new Cold War, it would be misguided to presume that such a war would necessarily remain cold.

Recent developments in China, including what comes out of its propaganda apparatus, suggest that at least one side is not ruling out a hot war. And that should concern everyone — more than any diplomatic tensions or saber-rattling on the surface.

This assessment is based on an artificial intelligence project we developed, the Policy Change Index (PCI), which reads the tea leaves in China’s propaganda and makes policy inferences. Decoding propaganda is useful because it reveals what the government really thinks — but isn’t telling us — or what it plans to do next.

For example, last year we predicted, contrary to much optimism from some at the time, that China would not back down on the structural issues in the trade negotiations with the United States. That prediction is still standing today. Decoded words, deciphered intentions, speak just as loudly as actions, not to mention the perception of inaction.

As China puts the novel coronavirus largely under control, its post-COVID agenda is taking shape on our AI’s radar. For now, President Xi Jinping is pivoting to domestic issues that boost his popularity, and he looks poised to advance China’s military might overseas.

As of 2020’s second quarter, our PCI detects changes in China’s policy direction by spotting issues that, between now and the previous five years, have become more salient in the coverage of propaganda. While our AI indicates new priorities including growth and development, science and technology, and reopening, the largest propaganda shift is toward China’s next big move: military.

Besides reopening the economy, President Xi is — as our PCI predicts — refocusing on domestic policies, such as eliminating poverty, boosting the rural sector and advancing science and technology. This is almost a necessity, given that the pandemic has disproportionately impacted the poor and spurred nationwide discontent over how the government has handled the outbreak.

What’s more unusual and alarming is the heightened emphasis on the military. This includes, most recently, bringing the entire military reserves under President Xi’s control — a decision touted in China’s official media and flagged as significant by our algorithm.

Where might China’s military muscle be flexed? While both the South China Sea and the Sino-Indian border are known to be conflict-prone, China’s ambition to overtake Taiwan is just as concerning.

Remember Intel Corporation’s blunder last month, when the semiconductor chip manufacturer’s shares slumped more than 16% in one day over the delay of its next-generation chips? That ostensibly unrelated event may put Taiwan in the forefront of the mounting U.S.-China tension.

Taiwan is home to one of the world’s leading chip manufacturers, the Taiwan Semiconductor Manufacturing Company (TSMC), which has been in intense competition with Intel and South Korea’s Samsung. The delay that Intel announced was about the seven nanometer (7 nm) chips, which are already in production by TSMC and, to a smaller scale, Samsung. Intel may even fall generations behind TSCM, as the latter is slated to start producing 3 nm chips next year before Intel could even fulfill its 7 nm promise.

In the quickly intensifying U.S.-China rivalry, Taiwan will be to semiconductors what the Middle East is to crude oil. (Recall oil’s impact on national security and military actions over the last few decades.) The fact that Samsung, the semiconductor runner-up, is so close in the region doesn’t offer any comfort in the event of armed aggression.

It’s anybody’s guess as to whether and when President Xi may act on Taiwan — or anywhere else. But the fact that there are hot-war options on the table, and that China’s propaganda apparatus seems to be gearing up for it, may be more than enough to concern anyone.

Weifeng Zhong is a senior research fellow with the Mercatus Center at George Mason University. Julian TszKin Chan is a managing economist and lead data scientist at Bates White Economic Consulting. Zhong and Chan are the core maintainers of the open-sourced Policy Change Index project. 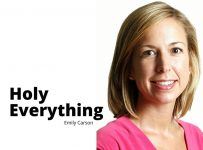 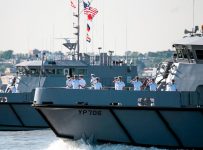