Borna Coric pulled off a through-the-legs lob shot winner that drew bows from the crowd in the Davis Cup semifinals on Friday in Zadar, Croatia.

Early in the third set of a 6-4, 7-6 (4), 6-3 victory over Steve Johnson, Coric ran down a lob and replied with a shot known as a tweener that flew over the head of his 6-foot-2 (1.88-meter) opponent and landed within inches of the baseline.

Later, sixth-ranked Marin Cilic gave Croatia a 2-0 lead over the United States with a 6-1, 6-3, 7-6 (5) victory over Frances Tiafoe, who was making his Davis Cup debut.

Coric, 21, considered one of the top young players in the game, said he had never before even come close to landing such a difficult shot.

“I normally go somehow around my back,” he said. “But I just felt that I can do it. It was not such an important point, so I just did it. Honestly I never do it in practice as well, so I don’t know how it was that good, to be honest. It was really luck.”

Moments earlier, the 18th-ranked Coric had landed a delicate forehand drop-shot winner to close out a close second-set tiebreaker.

“He came up with some good stuff today,” Johnson said.

The winner of the best-of-five series will meet either France, the defending champion, or Spain in the final.

In Lille, France, Benoit Paire overcame nerves to win on his Davis Cup debut and Lucas Pouille won a five-set battle as the pair gave France a 2-0 lead over Spain.

Spain is without top-ranked Rafael Nadal, who was ruled out because of the right knee injury that forced him to retire from his U.S. Open semifinal against Juan Martín del Potro last week.

In the doubles on Saturday, Julien Benneteau and Nicolas Mahut are set to face Marcel Granollers and Feliciano Lopez.

Paire looked submerged by emotions when France’s national anthem was played during the teams’ presentation ceremony and was very tense in the opening set, hitting nine double faults.

“It was normal to be emotional at the start, I had warned the captain it would be difficult for me,” said Paire, who lobbied the captain Yannick Noah this summer to get his first selection two years after being sent home from the Rio de Janeiro Olympics.

The hot-tempered Paire was excluded from the Rio Games after the French Tennis Federation accused him of breaking team rules.

“This episode at the Olympic Games has left a mark on me,” Paire said. “It’s terrific to be surrounded by all these people, I’m glad Yannick trusted me.” 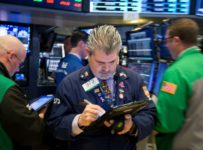