“I want you all to join me in a rally to save the parasites,” says Maureen Williams onstage at the Science Gallery in Dublin’s Trinity College. “The story has zombies, damsels in distress . . .”

We’re in and we’re hooked. Seconds later she’s telling us that a worm that lives inside a cricket needs to get into water to complete its lifecycle.

“So the worm takes control of the cricket’s brain and makes the cricket take a short walk off a long jetty . . .” A balloon bursts, and the audience laughs. “At which point the worm explodes out, a trout comes along and eats the cricket, getting food at the time it needs it most. And the parasite gets to complete its lifecycle.”

Like most people who have to stand up in public to give a talk, scientists and students find it can be quite nerve wracking

In less than three minutes we’ve had a lesson in parasitology, without a slide in sight. This was the Famelab final, a science communication and training competition run by the British Council and funded by Science Foundation Ireland, which gets scientists talking in a way the rest of us can understand.

Williams’ story about parasites is a popular Famelab theme but in her case she’s actually doing her PhD on Irish freshwater shrimp, who get a parasite that drives to them to go towards their predators in a similar way.

Like most people who have to stand up in public to give a talk, scientists and students find it can be quite nerve wracking. When Niamh Kavanagh entered Famelab the first time round it didn’t go very well.

“When I went on the stage I froze.” She’s laughing down the phone from the Tyndall Institute in Cork, where she’s working on next generation fibre optics to expand internet capacity, but it wasn’t funny at the time. “I couldn’t remember the start of the talk. It was probably only for five seconds, but it felt like eternity. I was determined that wouldn’t be my only experience of Famelab, so I went back again the following year.”

The next year she wowed the judges with her explanation of the laser detection system LIDAR, which “bounces pulses of light enabling us to illuminate the invisible”. She won the competition, with her illustration of how LIDAR kept planes flying during the Icelandic ashcloud, and went on to represent Ireland in the world final at the Cheltenham Science Festival.

Right now students, PhDs, researchers and others are practicing in front of the mirror for this year’s regional finals. Participants get just three minutes to explain a science concept to a jury and a live audience. Slides are most definitely not allowed.

Remsha Afzal, a PhD student in genetics, won the mini heat at RCSI and will take part in the Dublin regional final on February 22nd. Her research focuses on the role of cells called macrophages in autoimmune disorders such as multiple sclerosis.

There’s a huge demand to communicate science to the public, and there’s no time for waffle

“I had this big Pacman on the stage with me, to explain how macrophages work,” she says. “I had an angry face on one side and a calm one on the other. What I’m researching is how to create a pathway to change macrophages from ‘angry’ to ‘calm’ so they don’t go into an inflammatory state and attack the body’s own cells.”

While props and cool analogies help get attention and get you points from the judges, science communicators also need to convey what can be complex information in a clear and concise manner. It’s not just about adding a few ingredients to an existing presentation, but thinking more fundamentally about how to get information from one brain to another.

Former M*A*S*H* star Alan Alda was the guest speaker at the recent SciCom conference in Dublin. The actor, who now leads a science communication programme at Stonybrook University, kept the one-liners coming – “Power corrupts; and PowerPoint corrupts absolutely” – but perhaps his most valuable insight was one that can be used by all communicators, no matter what the topic. “We don’t start with figuring out the message,” he says. “We start with figuring out where the audience is at. It’s about building a connection.”

Alda has used techniques from acting, particularly improvisation, in the courses offered at his science communication centre. On the stage he and Irish science communicator Jonathan McCrea did a silent mirroring exercise, trying to follow exactly what the other was doing, a way to get into sync with the person you are communicating with. One of the attractions of Famelab is that the 12 finalists get a two-day masterclass in science communication with McCrea, and BBC broadcaster Malcolm Love.

“The competitors are extraordinarily bright people, with PhDs and beyond,” says McCrea. “But scientists aren’t typically taught how to communicate from scratch. All through childhood we haven’t been teaching the craft of storytelling.”

Love and McCrea use techniques such as visualising, metaphors and prisming – exploring different angles to tell the same story.

“They try to get you out of your comfort zone,” says Kavanagh. “We did exercises like how to talk for a minute about a pen. Or things like communicating your research in 300 words, then 100, 50, 10, down as far as 5. It helps you to pinpoint your key messages. People are exposed to so much information – why should they care? If you’re the expert it’s your job to condense it and make it accessible.”

For McCrea supporting science communicators is important for wider societal reasons. “For one thing we’re spending public money on science, so people need to understand it. But we also need to think critically about scientific issues, and to do that we need a scientifically literate public.”

Eoin Murphy, who was a finalist last year, says Famelab has opened doors for him in terms of his career and he’s now writing and speaking more about his work researching Huntington’s disease at NUI Galway. Instead of using percentages, he talks about how many people in a packed Croke Park are likely to suffer from Huntington’s – fifteen or twenty, for a disease that is currently incurable.

In his final presentation he used a homemade chromosome, made from pool tubes and Velcro, with different coloured sections to explain how CRISPR gene editing therapy might become a reality for sufferers. Murphy is now involved in organising this year’s Galway heats and urges anyone interested to take part. “There’s a huge demand to communicate science to the public, and there’s no time for waffle. “

Maureen Williams is doing her viva for her parasitology PhD later this month, and will be using some of the skills she learned from Famelab.

“It’s around 40 minutes long, but I’m aiming to do it with photos and graphs. There’ll even be some fun videos of diving into the Shannon to conduct experiments. That’s all down to the fact that I’m no longer afraid to do a presentation without PowerPoint!” 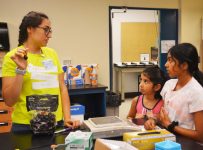 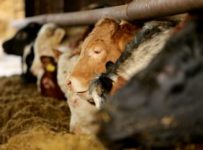