With 21st Century Fox Inc.’s deal with Walt Disney Co. nearing completion, the company is laying out plans for a new life anchored by popular TV programming and the National Football League.

After earnings and sales topped analysts’ estimates on Wednesday, Fox Co-Chairman Lachlan Murdoch switched the focus to “new Fox,” which will be spun off in conjunction with Disney’s $71 billion takeover of the company’s entertainment assets. He said management has made substantial headway toward crafting the new business, which will feature the No. 1 cable-news channel and a sports network with 40 percent of all NFL viewership.

“The new Fox will boast the schedule of America’s most engaging sports news and entertainment programming,” Murdoch, eldest son of media magnate Rupert Murdoch, said on a conference call with analysts. The discussion was a swan song of sorts for Fox, which doesn’t plan to hold a call after its next quarterly results.

For now, Fox is getting a boost from assets that it plans to sell to Disney. Movies like “Deadpool 2” contributed to earnings of 57 cents a share in the fiscal fourth quarter, excluding some items. Analysts estimated 54 cents a share on average.

Fox shareholders approved the Disney deal last month, agreeing to sell off 20th Century Fox studio and cable channels such as FX and National Geographic to a company that already owns Star Wars, Pixar and other entertainment franchises. The remaining parts of the business will be used to create the new Fox, which will retain the Fox network, Fox News and other assets.

Fox’s revenue rose 18 percent to $7.94 billion last quarter, topping the $7.55 billion estimated by analysts. But with the Disney deal looming, investors aren’t trading as much on the results: The shares were little changed in after hours.

In addition to the main Fox network and Fox News, sports channel FS1 and other properties would be spun off into the separate, publicly held business. Senior Fox executives such as Peter Rice, meanwhile, are expected to move to Disney. Chief Executive Officer James Murdoch, Rupert’s other son, also is expected to leave the company after the deal.

Earnings for cable-network programming grew 12 percent to $1.61 billion in the fourth quarter, which ended June 30. Filmed entertainment posted a profit of $289 million, compared with a loss of $22 million a year earlier.

The success of the “Deadpool” sequel helped fuel the movie business’s turnaround, with the superhero film generating move than $730 million in worldwide box-office sales.

Fox executives skirted questions from analysts about losses at streaming service Hulu, which it partially owns with other media giants. Fox is selling its stake to Disney as part of the $71 billion transaction.

“We and the other partners and Hulu are eager to invest and continue to grow the platform,” James Murdoch said on the call. “The volume growth is very, very strong.”

— With assistance by Karen Lin 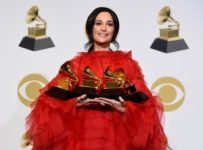 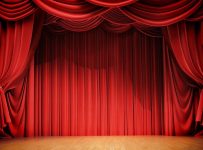