The corporate backlash over the sweeping overhaul from Coca-Cola, Delta Air Lines and Major League Baseball has had a unifying effect for Republicans seeking ways to heal divisive rifts within the party and keep voters energized after demoralizing losses.

And it’s helped lift the fortunes of top state Republicans, including Kemp and Attorney General Chris Carr, who are turning the fallout into a rallying cry as they try to push the party beyond a stubborn split with Trump after he blamed the governor for his election defeat.

“Cancel culture has definitely hit a nerve — and it’s given conservatives a moment to take advantage of the overreach by Democrats,” said DeAnna Harris, a veteran GOP activist who leads the Cobb Young Republicans. “You never let a good crisis go to waste, and we know we’ve got to ride this into 2022.”

Critics of the law, of course, are also promising to exact political revenge after Republicans muscled through the voting changes, which include new ID requirements for absentee ballots, a shortened deadline to request mail-in votes, rules that limit ballot drop boxes and new leeway for the GOP-controlled Legislature to influence local elections.

Democrats and their allies predict that outrage over the new law, which has already drawn five court challenges, will galvanize supporters ahead of a 2022 election that will feature Democratic U.S. Sen. Raphael Warnock’s reelection battle and a likely rematch between Kemp and Stacey Abrams. In an interview, Abrams said GOP attempts to frame the changes as incremental improvements to a voting system that came under duress last year would fall flat with voters who recognize they were driven by Republicans with a false belief in a stolen election.

“These are not men and women who are unclear about their motives and their effect,” she said. “These bills are being promulgated across the country with the intended effect of blocking voters who are becoming inconvenient to the Republican Party: voters of color, young people and the poor.”

The hue and cry over “cancel culture” is no new phenomenon in Georgia Republican politics. During the 2020 special election, then-U.S. Sen. Kelly Loeffler parlayed the backlash against her outspoken criticism of the Black Lives Matter movement into a call for Republicans to circle the wagons around her November election bid.

Now Loeffler leads a GOP voter mobilization group called Greater Georgia, and last week at a bar outside Truist Park she urged supporters to stick it to Major League Baseball by cheering the Braves to the World Series — forcing the game’s premier championship to be held in Georgia.

“This is what Democrats do when they get too much power. They take economic opportunity from small businesses, from our state,” Loeffler said. “We’re not going to stand by. We’re going to take our state back, and we’re going to make sure they know this state is open for business.”

Indeed, even issues that a few weeks ago dominated GOP discussion have been shoved aside, at least in the short term. When Kelvin King this week became the first prominent Republican to announce a campaign against Warnock, his announcement made no mention of the $1.9 trillion coronavirus relief package but featured a pledge to fight the trifecta of “career politicians, woke corporations and the cancel culture.” 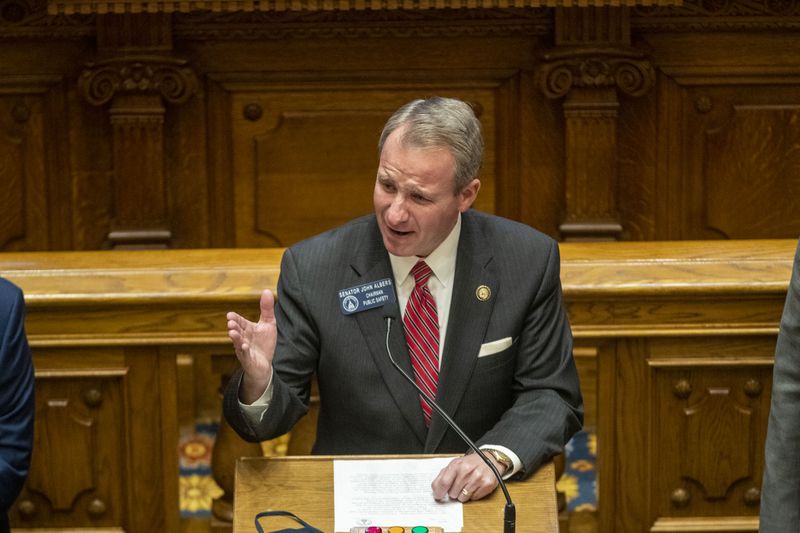 An emotional state Sen. John Albers, R-Roswell, spoke last month on the floor of the Georgia Senate about how he was forced to resign from his job at an Atlanta law firm after a group used Twitter to wrongly accuse him of sponsoring a measure to suppress votes. (Alyssa Pointer / [email protected])

Lower-profile officials, too, have keyed on the fallout. State Sen. John Albers, R-Roswell, grew emotional last month on the floor of the Georgia Senate when he talked about how he was forced to resign from his job at an Atlanta law firm after he said a tweet from an anti-Trump group wrongly accused him of sponsoring a measure to suppress votes.

And Insurance Commissioner John King, whose job has nothing to do with the back-and-forth over the election law, said after a campaign kickoff in Cartersville this week that the blowback was in the “back of my mind” as he runs for a full term.

“I’m clearly worried about the cancel culture and the effect it has with the Latino business community,” said King, the first Hispanic statewide official in Georgia history. “The people trying to make ends meet are being penalized because of this.”

And Republicans aren’t above their own cancel culture. Trump has called for boycotts of “woke-a-cola,” and some state lawmakers refused to carry Coca-Cola products in their offices. And the Georgia House voted to strip Delta Air Lines of a lucrative tax break in the final hours of the legislative session, though the rebuke didn’t come up in the Senate.

Emory University political scientist Andra Gillespie said it plays into the “politics of martyrdom” that Trump expertly leveraged to fuel his 2016 election win.

“Grievance sells. Donald Trump built a brand around perceived loss of social dominance, and state Republicans want to tap into the same mojo,” said Gillespie, who singled out Kemp’s ongoing struggles with the former president.

“It’s an opportunity for Kemp to reestablish his conservative bona fides, to say to voters that he supports the principles and the rhetoric that motivate Trump-supporting Republicans and signed a bill that’s tailor-made to address their concerns.” 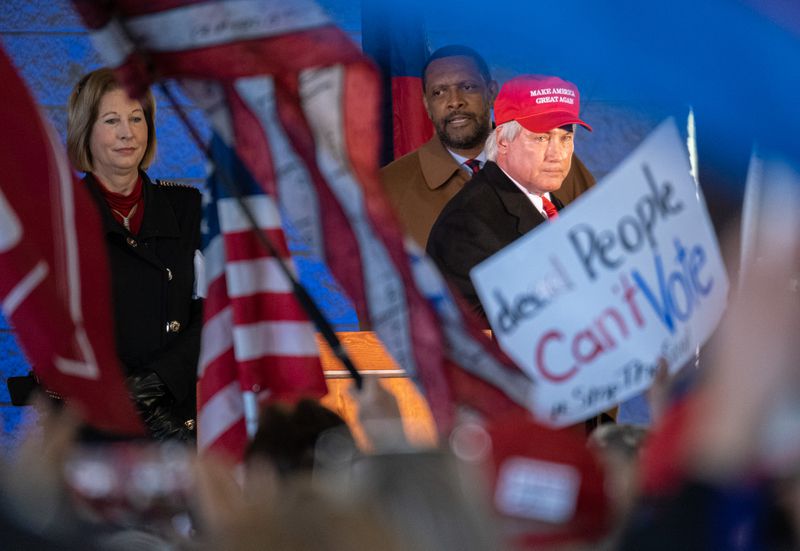 Republicans are campaigning hard on the issue of “cancel culture,” but they also employ it at times. Former President Donald Trump, for example, has called for a boycott of Coca-Cola after it described Georgia’s new election law as “unacceptable.” Ben Gray for the Atlanta Journal-Constitution

The former president has hardly relented on Kemp and has mocked the law as a “watered-down” grab bag that doesn’t go far enough to restrict the vote. Some GOP activists still furious with the governor have moved to “censure” him. And Trump could still back a primary challenger — possibly former Democratic lawmaker Vernon Jones, who has hinted he could soon enter the race.

But even Kemp’s GOP critics acknowledge his footing has improved as he blankets conservative airwaves and stages events intended to keep the focus on his unwavering support of the election overhaul.

Shortly after he was showered with praise at the Cobb meeting, Kemp made a beeline to a nearby seafood restaurant to highlight concerns that the loss of the All-Star game will hurt small businesses.

Harris, the grassroots Cobb activist, predicted the aftermath of the election law gave Kemp’s reelection chances with a once-skeptical base more than a shot in the arm.

“It’s like a shock to the heart,” said Harris, who supports him. “His standing with the party’s base has really improved — and this story has hit him with a zap. You can tell it’s given him a lot of energy. He’s riding a wave.”