I grew up in Lake Tahoe, North America’s largest mountain lake located in the Sierra Nevada Mountains. Over 2 million years old, the lake is also one of the deepest in the world and contains more mysteries than you could ever imagine.

One modern day mystery is the recent record-breaking real estate acquisitions of prime lakefront property in Tahoe City on the California side, and in Incline Village on the Nevada side. With the current popularity of land acquisitions by tech billionaires from nearby Silicon Valley, numerous estates are being listed with earth shattering prices starting at $35 million for 24 Fitness founder Mark Mastrov’s Glenbrook lakefront estate, and upwards to $75 million for a Crystal Bay cliffside home with funicular.

The real question is, why are the world’s wealthiest individuals collecting so many properties along the lake like players in an extravagant game of Monopoly? Is it because of the well-known Nevada tax benefits, or is it something more secretive? Perhaps it is simply because they love the area and need an easy getaway that is close to Silicon Valley. 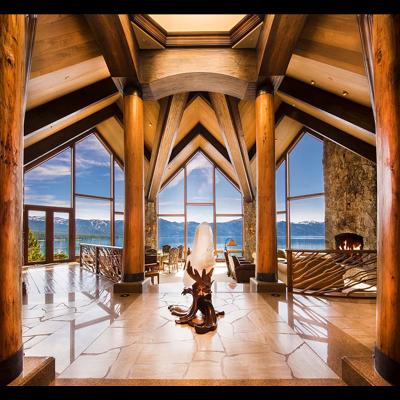 Gallery: The 6 Most Expensive Lake Tahoe Homes For Sale

The highest concentration of billionaires is along the shoreline in Incline Village, Nevada. It is considered “Billionaires Row” or “Income Village,” and is basically one giant country club with large gated estates that you can only see from the water. Among the wealthy residents past and present are Larry Ellison, David Duffield, Michael Milken, Gene Pretti, Walmart heirs, and more. Howard Hughes once used this location as an escape, and his log home recently sold for $17.5 million while Casino magnate Steve Wynn sold his longtime lakefront estate for $31 million.

The newest billionaire in town is Facebook’s Mark Zuckerberg who acquired neighboring Tahoe City properties for a whopping $59 million. His new purchases include the 100-year-old iconic Brushwood Estate ($37 million) and Carousel Estate ($22 million). This will be a massive compound once development is complete. A mystery corporation also plucked up the estate next door to Zuckerberg last year for $41.5 million. And real estate agents in the area are talking about Tesla’s Elon Musk eyeing prime lakefront acreage.

In addition to already owning multiple properties on the lake, Larry Ellison purchased the historic Cal Neva Lodge (once owned by Frank Sinatra) in Incline Village, and has plans to build a luxury hotel on the site. I wouldn’t be surprised to see a Nobu Hotel announced soon, considering he already put the famous hotel brand on his property in Malibu.

I personally have a long history with Lake Tahoe, my father was among the partners in the Cal Neva Lodge in the 70’s, following its pedigreed owners Frank Sinatra, Dean Martin, and Chicago mobster Sam Giancana. Regulars included the Rat Pack and stars like Marilyn Monroe and Joe DiMaggio. I fondly remember many late nights hanging out with Sammy Davis Jr. and the others in my teenage years. It is sad to see the departure of the historic casino and hotel that I visited often, but the property was in desperate need of upgrades, and hopefully, the new development will retain some of its storied history and environment.