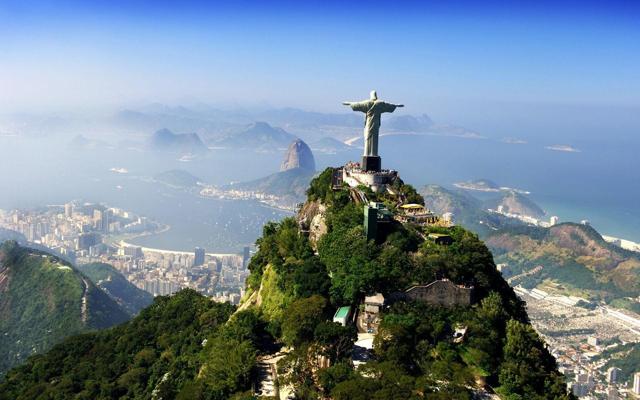 If I were to synthesize the current situation of the Brazilian economy in one sentence, I would say: “it is suffering from a combination of ‘productivity anemia’ and ‘public sector obesity’”. On the one hand, the mediocre performance of productivity in Brazil in recent decades has limited its GDP growth potential. On the other, the gluttony for expanding public spending has become increasingly incompatible with such limits in the potential expansion of GDP, particularly since the former has not been achieving socioeconomic results that match such appetite.

In my judgment, the crisis, followed by slow recovery in recent years, reflects the advanced stage of evolution of the disease, preceded by an incubation period during which its symptoms were disguised.

On August 23, the World Bank released a set of public policy notes laying down three reform paths with which the country can rediscover a trajectory of shared prosperity. Not surprisingly, in addition to proposals to improve productivity performance in the country, the notes suggest reforms in the governance model of the Brazilian public sector, accompanied by a review of public spending as the main element of a necessary adjustment in public accounts.

Let us start with the anemic increases in productivity, that is, of goods and services that the Brazilian economy is able to produce with what it has available in terms of material and human resources. More than half of per capita income growth over the past two decades has been brought by increases in the share of the economically active population, a source of expansion that will decline with the ongoing aging of the population.

From the mid-1990s onwards, Brazilian production per employee has been increasing at a snail’s pace rate of only 0.7% a year, partly because the level of physical investments has remained low, but mainly because the overall efficiency in the use of human and material resources has remained stagnant (Chart 1 – left side). 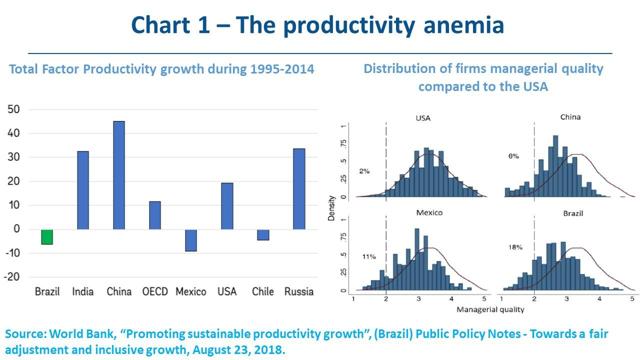 The World Bank suggests the adoption of a program of trade liberalization, since productivity levels below what would be possible are precisely one of the consequences of the exacerbated closure in Brazilian foreign trade, which imposes barriers to access to foreign inputs and technologies higher than in comparable countries.

There are also factors that limit competition in domestic markets – lack of logistics infrastructure, differentiated state tax regimes, subsidies to specific firms, etc. – that make the rate of survival and resource retention in less efficient companies higher than in other countries, with a price paid in terms of lower average productivity. Such a retention of resources in inefficient uses is illustrated in the right side of Chart 1 which shows Brazil’s distribution of firms’ managerial quality as compared to the USA. Policies to support the private sector need to shift from compensation for high internal costs to strengthening the adoption and diffusion of technologies.

The unfavorable business environment for entrepreneurs also undermines productivity. Among the components of such an environment, the complexity and imbalance of the tax system is a priority item for reform. The lack of investments in infrastructure and their declining quality in the recent past is another source of toll on productivity (Chart 2). 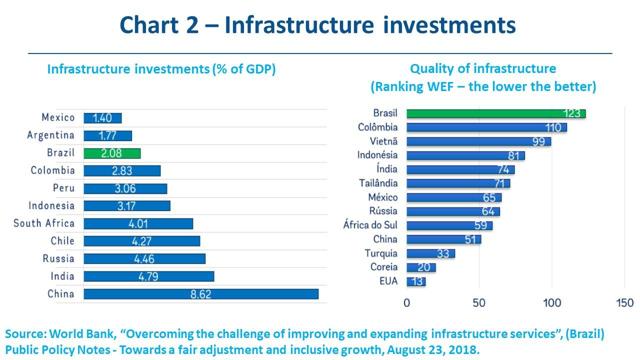 In the same way, financial intermediation in the country does not provide financing in terms appropriate to investments. The World Bank also notes how the quality of education and the formation of human capital could benefit from less rigid allocation of public resources and the dissemination of successful experiences taking place in states and municipalities.

While productivity and GDP growth potential have maintained their “anemic” increases, annual current public spending has risen sharply in real terms over the past decades: 68% between 2006 and 2017. As a proportion of GDP, public expenditures rose from less than 30 percent in the 1980s to about 40 percent in 2017. Meanwhile, public investment declined – less than 0.7 percent of GDP last year – partly explaining the precariousness of infrastructure we have referred to earlier.

With tax revenues reflecting the decline in GDP in 2015-16 and the subsequent fragile macroeconomic recovery, a deterioration in the primary balance by more than 4 percentage points of GDP launched public debt on an explosive trajectory, rising from 54% to 74% of GDP between 2012 and 2017.

Not surprisingly, fiscal adjustment is another of the paths suggested by the World Bank, noting that a path of gradual improvement in the primary balance equivalent to that contained in the constitutional amendment establishing a spending ceiling – 0.6% of GDP per year – could allow the return to a fiscal and sustainable debt trajectory in ten years.

Given the levels achieved by public spending and the automatic expansion mechanisms in place, as well as the potential pace of GDP growth, the World Bank’s macroeconomic projections do not give any hope for recovery of primary balances by pure and simple tax collection accompanying some return to economic growth. Attempts to revitalize the economy via increases in public spending not backed by some credible fiscal adjustment plan will not be able to convince private players to believe that growth might be sustainable. Under the assumption of a combination of a GDP growth rate at 2.4% per year and real interest rates at 4%, the World Bank projects rising and dampening public debt trajectories, respectively, without and with the spending cap (or an equivalent fiscal adjustment in the latter case) (Chart 3 – left side). 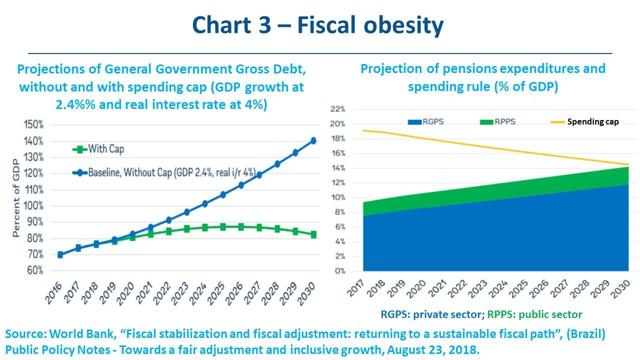 Expenditures on social security, the public sector payroll and subsidies and tax exemptions are items in which the World Bank highlights existing opportunities to reduce current public expenditures while minimizing impacts on the bottom layers of the income pyramid and opening space for other types of public expenditure. The right side of Chart 3 shows how a pension reform will be necessary to turn the spending cap feasible.

If the option to reconstitute primary balances falls to some extent on the tax side, there are possibilities for tax reform that would not only reduce its negative weight in the business environment but also reduce the social inequality embedded in the current system. Similar directions are also proposed for subnational public accounts.

The third path outlined by the World Bank is state reform. The mismatch between the limited growth potential that results from the “productivity anemia” and, on the other hand, the growing public spending, reflecting a desire for state responsibility in multiple social functions, is aggravated by a clear inefficiency in the provision of several services, comprising a “public sector obesity”. As to the sources of such inefficiency, the World Bank points to an excessive number of rules and budget rigidity; fragmentation of service delivery; poor planning, monitoring and evaluation of projects and policies; human resource management without positive performance incentives; judicialization of policy decisions; and growing risk aversion in the bureaucracy. Chart 4 illustrates these points by displaying the evolution of earmarked revenues (left side) and results achieved by public spending (right side). 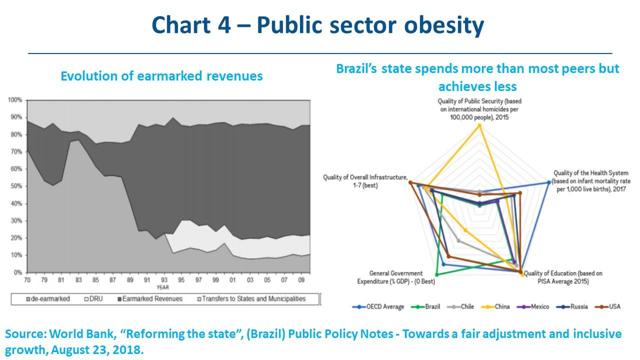 This is the case on health, education, violence, infrastructure, transportation and logistics and water resources management. In all of them, greater consistency between planning and execution, emphasis on evaluation, and higher fine-tuning between public and private sectors would lead to better socioeconomic results per unit of public expenditure.

The application of a gradual but steady treatment, while protecting the poor and the young, to cure the disease that is afflicting the Brazilian economy will be the responsibility of those elected in October.

Otaviano Canuto is an Executive Director of the World Bank. The opinions expressed in this article are his own.

Disclosure: I/we have no positions in any stocks mentioned, and no plans to initiate any positions within the next 72 hours.

I wrote this article myself, and it expresses my own opinions. I am not receiving compensation for it. I have no business relationship with any company whose stock is mentioned in this article.