Albert R. Hunt is a Bloomberg Opinion columnist covering politics and policy. He was the executive editor of Bloomberg News, before which he was a reporter, bureau chief and executive Washington editor at the Wall Street Journal.

Virginia Postrel is a Bloomberg Opinion columnist. She was the editor of Reason magazine and a columnist for the Wall Street Journal, the Atlantic, the New York Times and Forbes. Her books include “The Power of Glamour.”

Jonathan Bernstein is a Bloomberg Opinion columnist covering politics and policy. He taught political science at the University of Texas at San Antonio and DePauw University and wrote A Plain Blog About Politics.

Does James Carville’s famous campaign axiom — “It’s the economy, stupid” — still ring true? Some early indications are that Republican candidates are not trumpeting the strong U.S. economy under President Donald Trump as much as might be expected, given low unemployment and impressive GDP growth.

Do economic issues energize voters only when times are bad? Or, as Democrats claim, are GOP candidates wary of bragging about a boom when wages are still stagnant and the promised benefits of tax cuts haven’t helped the middle class, at least not yet?

That’s almost certainly the case now; even though Trump isn’t very popular, he would presumably be even less so if a recession had hit. It’s possible that the positive effects of the good economy on his approval have been dampened some by the lack of wage growth, although it’s extremely difficult to prove such things one way or another.

The other way to look at it is that regardless of how important the economy might be to election results, whether candidates will talk about it a lot has much more to do with their policy agenda and what they think voters want to hear.

During good times, voters may tell pollsters that other issues are more important to them, and candidates will scurry to respond to those stated concerns — but what voters say they want to hear and what prompts their voting behavior may be two very different things.

Bill Clinton, for example, spent his 1996 re-election campaign babbling about a bridge to the 21st century, whatever that was about, but he was almost certainly re-elected because the economy was booming.

Ramesh Ponnuru: Most voters, especially in this era of polarization, do not base their political decisions mainly on “the economy, stupid.” They are instead partisans for one or the other of the two main parties, whether or not they admit it to themselves.

Their partisan leanings affect their assessment of the economy more than the reverse. And these partisan voters are more likely to turn out in a midterm election than voters with weaker preferences between the parties.

Democratic partisans, Republican partisans and truly independent voters are all likely to base their votes mainly on how they think Trump is doing. Economic conditions are likely to have an effect on that last group’s assessment of Trump: The better the economy is doing, the better they will think of him and the more likely they are to vote for his party.

But they may also decide that they dislike some of his traits and that he needs a congressional check. His supporters may also be more complacent than his opponents, and thus vote at lower rates.

The latest quarterly economic growth rate was the best one we have had since 2014. That wasn’t a good year for the party in power. The Democrats, who held the White House then, lost control of the Senate. Republicans might lose control of the House this year, strong growth notwithstanding.

Al Hunt: The best way to address this may be to go back to the maestro, James Carville, who coined this perfect mantra for Bill Clinton in 1992.

He dismisses the distinction between presidential and midterm elections, and focuses on the durability of economic good, or bad, times. It has less to do with the data — GDP or even unemployment numbers — or the competing claims, and more to do with how voters feel.

“It takes a while for good economic numbers to kick in,” Carville said in an interview. He recalled that while the economy began rebounding in the initial Clinton years (actually it started at the end of the George H.W. Bush term), “We got clobbered in the 1994 midterms — people didn’t feel it yet.”

It’s not unusual for the economy to be a major factor in a non-presidential year, usually as a negative, as in 1982 when the Republicans got clobbered. He doesn’t see the economy helping Republicans much in November.

Moreover, to drive home a strong economic message requires a political discipline that Trump lacks. “One day he’s talking up the economy, the next he’s attacking Angela Merkel or praising Putin.”

I agree with the Ragin’ Cajun: The only recourse for Republicans is to energize their voters with fear. As Democrats try to rile voters with attacks on tax cuts for the rich and stagnant wages, Republicans can scare people with claims that the Democrats will impeach the president or enact a government-run health-care plan. I don’t think that’ll work.

Virginia Postrel: The economy matters, but, as I wrote in the run-up to the 1998 midterms, “identity trumps interest.”

Americans care, of course, about their economic interests. But they care first about their identities. Consider the tax-paying, socially conservative Latinos who went Democratic in droves thanks to Pete Wilson’s “They keep coming” campaign for Proposition 187. If voters feel personally attacked — because they are Latinos, or working women, or housewives, or evangelical Christians, or gays — they will bolt the party that serves their economic interests. Their “natural enemies” will start to look like their friends. And if they are courted, valued, and made to feel at home, they will reciprocate. Hence, as the saying goes, American Jews have the incomes of Episcopalians and the voting patterns of Puerto Ricans.

The intervening two decades have only intensified this phenomenon. Trump’s election finally decided the battle for the soul of the Republican Party.

Trump’s GOP is now the party opposed to the open society, including open markets (the party of stasis, as I defined it in my 1998 book “The Future and Its Enemies”). To its benefit, however, it also the party that doesn’t hate traditionalist Christians or white men — two extremely common voter identities.

In the midterms the Democrats benefit from being the anti-Trump brand, able to capitalize on discontent with the president without clearly defining themselves as the sharply leftist party many activists yearn for. The oppositional definition helps in congressional races, allowing candidates to nationalize anti-Trump feelings while tailoring specifics to local sentiments.

Meanwhile, the good economy encourages voters who might otherwise lean Republican but don’t identify with Trump’s policies or character to simply stay home.

Noah Smith: Unemployment is at record lows, but in the past there hasn’t been much correlation between unemployment and midterm election results.

A better predictor might be the change in real disposable income from the third quarter of the year before the election to the second quarter of the election year. Those numbers are in, and the number for Q2 2018 is 2.3 percent. That’s a strong number, and, according to a 2009 regression run by political scientist Seth Masket, would predict only about a 20-seat loss for the GOP — slightly less than the Democrats need to retake the House.

Of course, that prediction depends on a small sample of past elections, and even so there’s a huge amount of random noise — the GOP under George H.W. Bush in 1990 lost only a few seats, despite real per capita disposable income growth of only around 1 percent, while the Dems under Bill Clinton lost over 50 seats in 1994 despite a better income growth number.

So the predictors we have are pretty weak. There might be other predictors that political scientists just don’t bother to look at very often. Gas prices are almost $3 per gallon, which is reasonably high. Median real weekly earnings for full-time employees were lower in Q1 2018 than in Q2 2017, consistent with generally sluggish wage growth.

Then again, growth has been robust. So there are indicators that point in both directions. It just depends on what people care about.

One wild card is Trump’s trade war. Trump’s tariffs have hurt some manufacturers, and retaliation has hurt farmers. Trump shows no sign of backing down. His offer to bail out affected farmers didn’t seem to go over too well either — very few businesspeople want to be dependent on the government dole.

The economist Mancur Olson theorized that when the benefits of a policy are vague and spread out throughout the economy, while the harms are concentrated on a few victims, people don’t like it. In the case of the trade war, the harms are highly visible and concentrated on a few unlucky businesses and their workers, while the benefits – except to steel and aluminum makers – have yet to materialize.

That could play badly with voters in November. Sometimes what’s important isn’t the economy’s current condition, but what a leader is doing to affect its future condition – and here, Trump doesn’t look great.

Look at the Electoral Evidence

Conor Sen: Carville was a presidential adviser, and that’s the issue here — “It’s the economy, stupid” works for presidential elections, but less so for midterms. The economy was bad during the 2002 midterm election season but the country rallied to Republicans and President George W. Bush in the wake of the 9/11 terrorist attacks. By comparison, in 2006 when the economy was good but the wars in Iraq and Afghanistan were unpopular, the country turned control of the House over to Democrats.

Whether it’s the special-election results since the beginning of 2017 or generic ballot polling for Congress, the evidence so far suggests that voters are leaning more toward Democrats even with the economy performing well.

To contact the editor responsible for this story:
Katy Roberts at [email protected] 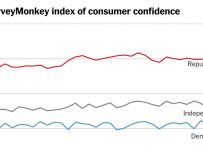