Senate Majority Leader Mitch McConnell said he never considered urging the White House to withdraw Brett M. Kavanaugh’s nomination to the Supreme Court and called opposition to the judge a “great political gift” for Republicans ahead of next month’s midterm elections.

In an interview with The Washington Post hours before Kavanaugh’s near-certain confirmation on Saturday afternoon, the Kentucky Republican again underscored his confidence in Kavanaugh’s denials of allegations of sexual misconduct decades ago while decrying the protesters who have challenged senators for days.

“I never thought Judge Kavanaugh would withdraw,” McConnell said during the interview with The Post. “When your integrity is attacked like his was, a withdrawal was certainly no solution to that, so we were in the fight to the finish.”

McConnell, overseeing a razor-thin 51-49 GOP majority, said the GOP is already seeing a boost in polling in Senate races due to the Democratic opposition to Kavanaugh combined with the protests. Republicans are on offense in the fight for control of the Senate, with 10 Democrats seeking reelection in states President Trump won in 2016.

“It’s been a great political gift for us. The tactics have energized our base,” he said, adding: “I want to thank the mob, because they’ve done the one thing we were having trouble doing, which was energizing our base.”

McConnell said he became confident he had the votes only when the roll call occurred Friday morning, when the Senate narrowly moved to advance Kavanaugh’s nomination. He announced last week that the Senate would vote on Friday following a brief FBI investigation — a probe demanded by a trio of influential Republican senators who had yet to announce how they would vote on Kavanaugh’s nomination.

The White House, McConnell said, “took some grief for a decision they didn’t make” — referring to the scope of the FBI’s background investigation into allegations that Kavanaugh sexually assaulted two women in separate instances decades ago. Kavanaugh has vehemently denied all accusations of misconduct, and McConnell said the report was “reassuring.”

McConnell — who swiftly declared “I believe the women” when Republican Senate candidate Roy Moore faced allegations of sexual misconduct — declined to answer directly when asked whether he believed any part of the testimony from Christine Blasey Ford, who accused Kavanaugh of sexually assaulting her when they were teenagers more than three decades ago.

“Well you know, we had an FBI investigation to follow up. Every one of us had a chance to look at the facts, to listen to the testimony of both witnesses,” McConnell said. “We made a decision, and Judge Kavanaugh’s probably sitting on the Supreme Court.”

McConnell’s full-throated support of Kavanaugh is also notable partly because the federal appeals court judge wasn’t the majority leader’s first choice. Before Kavanaugh was announced July 9 as President Trump’s nominee, McConnell said had been privately advocating for Amul Thapar, who currently sits on the 6th U.S. Circuit Court of Appeals and is a fellow Kentuckian.

The New York Times reported July 7 that McConnell had warned the White House that Kavanaugh’s lengthy paper trail from his tenure in the George W. Bush White House would be challenging in trying to confirm him.

“I said to the White House, the only challenge I thought would be the voluminous paper. And sure enough, it was one of the many tactics the Democrats tried to use,” McConnell said. “But I think voluminous paper was certainly not a rationale for not making the nomination.”

In the Post interview, McConnell praised Sen. Susan Collins (R-Maine) — who detailed in a lengthy speech Friday afternoon why she decided to back Kavanaugh — calling her a “very independent” and “very smart” GOP senator who “went through this very thoughtfully.”

But McConnell twice declined to comment on Sen. Lisa Murkowski’s (R-Alaska) decision to oppose Kavanaugh. Murkowski raised questions about Kavanaugh’s temperament for the bench after watching his combative testimony before the Senate Judiciary Committee last week.

“Well, I’m just grateful we won and I’m not going to go back and critique every utterance by members on either side,” McConnell said when asked for the second time about Murkowski. “We’re gonna win this. This was important for the country that we were not steamrolled.”

McConnell made several references to the “mob” of energized anti-Kavanaugh protesters who flooded the Capitol this week — many of whom were assembled outside the Senate on Saturday morning as the chamber prepared to vote on his confirmation.

While thanking Sen. Joe Manchin (D-W.Va.) — the only Democrat who has announced his support for Kavanaugh — McConnell predicted that the opposition to the judge from senators such as Heidi Heitkamp (D-N.D.) and Joe Donnelly (D-Ind.) is a “big problem” for them and a “great asset for us politically.”

“Nothing brings home the importance of the Senate like a court fight and nothing unifies Republicans like the courts,” he said. “Whether you’re a Trump Republican or a Bush Republican or whatever kind of Republican you are, we all think putting strict constructionists on the courts is important.” 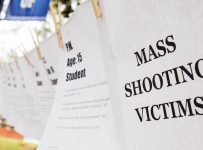 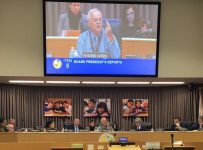