SABB was up 0.4 percent. The lender said the value of the sale was 36 million riyals ($9.60 million). Following the completion of the transaction, SABB will own 49 percent, while HSBC Asia Holdings will own 51 percent in HSBC Saudi Arabia.

Investors will be eyeing the flow of corporate earnings this week as first quarter results get under way.

Islamic lender Alinma was up 0.94 percent after recording a sharp increase in its first quarter net profit of 709 million riyals ($189.07 million), compared with 582 million riyals a year ago.

Telecommunications firm Etihad Etisalat (Mobily) was up 2.24 percent after it posted a net profit of 67.3 million riyals in Q1, versus a loss of 93.4 riyals a year ago.

First Abu Dhabi Bank (FAB) continued its gains, as it was up 1 percent. The bank has risen nearly 9 percent last week after obtaining regulatory approval to increase its foreign ownership limit to 40 percent from 25 percent. 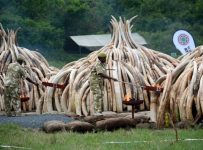