Representatives of the North Korean and Russian foreign ministries met in Moscow last week to sign an agreement on exchanges for the next year in areas such as politics and the economy, DPRK state outlet Korean Central News Agency (KCNA) reported Monday.

The meeting between Vice Foreign Minister Im Chon Il and his Russian counterpart Igor Morgulov took place on March 14 and received a short readout from the Russian foreign ministry at the time.

That report said the two sides discussed “topical issues of development of bilateral relations” including over “political contacts and prospects for promoting cooperation in practical areas,” in addition to the “situation on the Korean peninsula.”

KCNA on Monday expanded on the details of the meeting, saying a “2019-2020 plan of exchange” was signed as “both sides agreed to boost high-level contact and exchange in the political field [and] actively promote cooperation in the fields of economy and humanitarianism.”

And as talks between the U.S. and North Korea hit another major stumbling block in the wake of the no-agreement Hanoi summit, the two allies also agreed to “bolster up mutual support and collaboration in tackling the issue of the Korean peninsula and on the international arena.”

This meeting and others between the two sides this month, KCNA reported, are part of efforts to “steadily develop the traditional and strategic DPRK-Russia relations this year marking the 70th anniversary of the conclusion of the DPRK-Russia agreement on economic and cultural cooperation.”

The two countries earlier this month held the 9th Intergovernmental Committee (IGC) for Cooperation in Trade, Economics, Science, and Technology in Moscow, where progress was made on joint projects such as a new cross-border bridge and plans for a “trading house” based in Vladivostok.

But with both sides likely expecting some form of sanctions relief to have emerged from the second DPRK-U.S. summit, it also appeared that less progress was made than originally intended, concluding the 9th IGC without concrete agreements.

Part of Vice Foreign Minister Im’s meetings in Moscow also appear to have been geared towards separate avenues from the U.S. for sanctions relief, meeting with Russian vice-foreign minister in charge of international organizations Sergei Vershinin on March 16.

According to a Russian foreign ministry readout of the meeting, “special attention was paid to the situation on the Korean peninsula and the tasks of its comprehensive settlement with due use of the potential of the UN Security Council.”

The KCNA report on the meeting only said the two “exchange[d] views to ensure peace and security of the Korean peninsula and boost cooperation between the two countries.”

It is possible that the “humanitarian” exchanges mentioned as having been discussed between Im and Morgulov was also a topic on the agenda with Vershinin, as Russia has been working with the UN to coordinate continuing shipments of aid to North Korea.

Earlier this month, Russia delivered through the World Food Programme (WFP) over 2000 tons of wheat to two east coast ports of North Korea, and has voiced its intention to boost such aid this year. 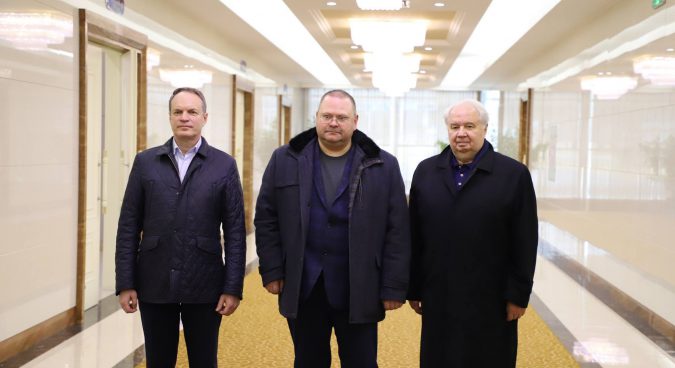 Meanwhile, Russia-DPRK exchanges continued over the weekend in Pyongyang with a delegation of the Russian Federal Assembly led by Oleg Melnichenko arriving there on Saturday.

A KCNA report said Melnichenko serves as chairman of the Federal System, Regional Policy, Local Autonomous and Northern Affairs Committee of the assembly and chairman of the Russia-DPRK Friendship Parliamentary Group, and that the visit is also part of 70th anniversary celebrations.

A post on the Facebook page of the Russian embassy in Pyongyang provided further details, including that former long-time Russian ambassador to the U.S. Sergey Kislyak – now a representative of the country’s upper house of the Federal Assembly – is part of the delegation.

Kislyak has met U.S. President Donald Trump on numerous occasions and is known for being involved in attempts by Trump’s campaign to secure a back-channel for communications with Russia.

A Russian art troupe has traveled to the country as well, the embassy report continued, and will “perform at a gala reception in honor of the [70th] anniversary, and will give two concerts for the residents of Pyongyang in one of the capital’s main venues – the Ponghwa Art Theatre.”

It was also reported earlier this month that a separate delegation from the State Duma (the Federal Assembly’s lower house) will visit Pyongyang on April 12 to “discuss the creation of a venue for dialogue between the Russian and North and South Korean members of parliament.”

Lawmaker and leader of the Duma’s “Group of Friendship” with North Korea’s parliament Kazbek Taisayev told reporters ahead of the 9th IGC in Moscow that South Korean and Chinese lawmakers had expressed interest in the forum.

Further multilateral talks on its creation, Taisayev added, will be held at the “Development of Parliamentarianism” conference to be held in Moscow in July.

Representatives of the North Korean and Russian foreign ministries met in Moscow last week to sign an agreement on exchanges for the next year in areas such as politics and the economy, DPRK state outlet Korean Central News Agency (KCNA) reported Monday. The meeting between Vice Foreign Minister Im Chon Il and his Russian counterpart