CLEVELAND, Ohio – I just read the coolest book ever.

It’s called “The HeART of Cleveland” by Scott Kraynak. Kraynak, 42, might just be Cleveland’s biggest fan. He was born here but has worked as a park ranger all over the country. He’s currently a ranger in the Columbus area. He’s also an accomplished artist whose work can be found in several permanent collections and galleries.

But his book is a glorious celebration of Cleveland. It contains Cleveland art history dating back to the turn of the 20th century. The book is full of contemporary Cleveland artists as well.

Kraynak has rounded up contributions from about 70 painters, illustrators, sculptors, printmakers, cartoonists, photographers and poets, as well as a chef and a late, great punk rock musician, Mike Hudson of the Pagans.

Hudson died just before the book was published. The essay by him turned out to be his last hurrah. And so appropriate.

This book is kaleidoscopic in its range. It transcends time and space. It has an introduction by Henry Adams, a professor of art history at Case Western Reserve University and essays by gallery owner William G. Scheele, artist Douglas Max Utter and poet RA Washington.

The book is a visual and literary feast. Half the people featured in it I know and love; the other half, I was delighted to discover. The art is eclectic and eye-popping, and the writing is full of wisdom and whimsy.

“Cleveland is a city where winter is a major part of city life. In January and February cold fronts and snow move in off Lake Erie from the north and the city is transformed. I rode the bus to work every day for five years and the Cleveland Public Library was my stop. I noticed there was something very unifying about the freezing cold weather,” he writes.

“Clevelanders are friendly and tough. With this painting I was trying to convey the shared feeling when the icy wind blows downtown between the buildings, the temperature is sub-zero, and you share a half smile with the person next to you because you know they are feeling it too.”

And then there’s Mark Brabant’s color painting based on a photograph of two people at the end of a breakwall at Huntington Beach in the summer.

Kraynak is selling the book for $30. It’s available at Mac’s Backs on Coventry and Visible Voice bookstore in Tremont, and chef Jonathon Sawyer is going to start selling it at his restaurant Trentina in University Circle. It will also be available at the Cleveland Clothing Co. stores and at the Cleveland Museum of Art gift shop.

“No matter where I have found myself, Cleveland has never left my heart and soul,” Kraynak writes in the foreword. After looking at his marvelous book, no one could doubt that. 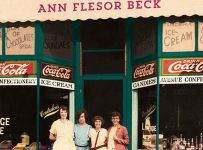 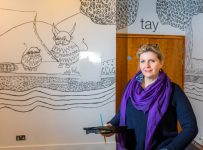