WINTER HARBOR — When Pam Di Ruggiero started working part time as a florist, she didn’t want to stop at the end of the day.

Now the Winter Harbor resident is turning that energy into a new business. Schoodic in Bloom is set to open later this month, as soon as the signs she ordered come in.

“We’re still getting stuff together,” she said, as she sat in her work space inside the Winter Harbor Inn, a four-room bed and breakfast she co-owns with her husband, Arnold.

Di Ruggerio has always loved flowers. She grew up in Mexico, Maine, next to a field where she liked to pick wildflowers and tried to make arrangements.

An octopus holding on to a shell serves as the coastal-theme container for this arrangement.
ELLSWORTH AMERICAN PHOTO BY JOHANNA S. BILLINGS

She finally decided to pursue her passion for flowers and became certified as a floral designer about a year and a half ago. Afterward, she began working part time at Hampden Floral, helping out during peak times such as Valentine’s Day and during prom season.

“I tried to get a full-time job but no one was hiring,” she said.

She wasn’t looking for a full-time job just because she needed something to do. In addition to floral arranging and running the inn, she also has a dog grooming business. In fact, she sold her first arrangement April 1 to Jim Maren of Steuben, the owner of a canine grooming client who had been in that day.

For her, the desire to work full time comes from her love of creating things with flowers, though she said she could not choose a favorite.

“I love all the colors,” she said. “It’s fun to create with all the different ones. Even when you make the same arrangement, it’s different.”

Di Ruggiero hopes Schoodic in Bloom will fill a void caused by a lack of other florists in the region. She plans to sell arrangements, both already made and made to order, as well as corsages, bouquets and anything else customers request.

“You can come in and buy one flower if you want to,” she said. “I want to cater to what people want.”

Pam Di Ruggiero chooses flowers for an arrangement in what will become her shop, Schoodic in Bloom.
ELLSWORTH AMERICAN PHOTO BY JOHANNA S. BILLINGS

Di Ruggiero has already chosen a way to set her work apart.

“[In] every arrangement, I want something that’s coastal,” she said.

Some of the arrangements she had on hand Monday featured starfish and other shells, ribbon with a maritime theme or even driftwood. Others were made in containers in the shape of sea life such as a whale and an octopus.

“I don’t want to be your typical cookie cutter [florist],” she said.

The shop will be open 9 a.m.-5 p.m. Tuesday through Saturday at the Main Street inn and will offer local delivery. The website can be found at www.schoodicinbloom.com.

“It’s a true passion,” Di Ruggiero said. “And if you can do that for your work, wow, you’re blessed.”

Reporter at The Ellsworth American 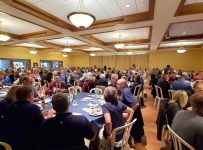