KUALA LUMPUR: Lynas Malaysia has hit out at its critics over claims of environmental hazards, saying such allegations are not rooted in science and serve only to scare members of the public.

In an interview with FMT, Lynas chief executive Amanda Lacaze said the company’s operations had already been reviewed eight times, twice by the International Atomic Energy Agency (IAEA), a parliamentary select committee, in four court cases and, most recently, by the new government’s review committee.

“The review committee recognised that Lynas is intrinsically low-risk and that we have management practices which further mitigate this risk,” she said.

Yesterday, Kuantan MP Fuziah Salleh, a staunch critic of Lynas, called on the company to send its radioactive waste back to Australia, purportedly because the review committee’s report showed it contained contaminated groundwater with cancerous materials.

Fuziah also said the committee’s report found that the nickel concentration reading of the groundwater was very low in 2007 but spiked after Lynas began its operations.

But Lacaze rubbished this claim, saying the report drew no such conclusion.

“What the report said – and anyone can check it out – is that the review committee made no findings on the source of this material and it recommends further studies to determine where it came from.”

She added that Lynas was confident it would be vindicated by the outcome of any such study.

“This is the problem when people pick up on something and try to connect dots which are not there in the first place. There is simply no evidence that this has anything to do with Lynas.”

“The claims about the radiation to scare everyone is silly nonsense and simply not based on scientific evidence,” she added.

She said the review committee, in its report, also noted that both the raw rare earth and processed residue were categorised as naturally occurring radioactive material (NORM) – similar to what is found on Langkawi island’s black sand beach – and that the low level of radiation remained unchanged throughout the process.

“The report noted that people often confuse NORM with radiation from nuclear fuel. NORM is what is around us all the time.”

On Fuziah’s call to take the residue back to Australia, Lacaze said, again, there was no scientific basis for this.

She said none of the qualified scientists from any of the review processes had recommended this.

“Our licence is explicit. We should explore reusing the residue or for low-level radiation like ours, the IAEA recommends diluting and dispersing the residue.

“If that is not possible, then we are to store the residue in a permanent deposit facility (PDF). Only if we fail to build a PDF are we to look at exporting the residue.”

Gypsum, she said, was the second most common byproduct from industrial activities in Malaysia. She said the amount produced by Lynas was “significantly” less than other companies in the country.

Typically, she said, gypsum comes in a slurry, which makes it difficult to manage. However, Lynas has gone a step further by applying best practices and new technology to press out most of the water, so the residue becomes claylike.

“This is then stored in a purpose-built facility, lined and double-lined with a sheet. There’s also special drainage which traps any residue in a bund.

“This ensures that it does not affect the environment.” 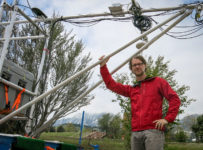 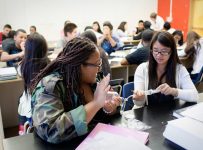