Two-time champions Gary Anderson and Michael van Gerwen both reached the quarter-finals of the PDC World Championship at Alexandra Palace.

Fourth seed Anderson fought back from two sets and 3-2 down to beat world number 36 Chris Dobey 4-3 in a thrilling tie on Thursday.

World number one Van Gerwen held off another two-time champion Adrian Lewis to secure a 4-1 victory.

The Dutch top seed is on course to meet Scotland’s Anderson in the semi-final.

In an absorbing and high-quality match, England’s Dobey raced into a 2-0 lead and missed a dart at the bullseye to go 3-1 up before Anderson levelled.

Dobey, 28, then came back from two legs down to claim the fifth set but fourth seed Anderson, 48, forced a decider.

Anderson edged in front to throw for the match but needed three darts at double six to wrap up a nervy win.

The Scot, who won the tournament in 2015 and 2016, will face either 12th seed Dave Chisnall or 28th seed Jamie Lewis in the last eight at Alexandra Palace.

Van Gerwen, 29, looked on course to beat Lewis, 33, easily as he quickly established a 2-0 lead before missing darts to win the third set.

Lewis, seeded 16th, capitalised to reduce the deficit and and then led 2-1 on legs in the fourth set.

But Van Gerwen responded with two straight 11-dart legs to go 3-1 up before closing out the win and will face either James Wade or Ryan Joyce in the quarter-finals. 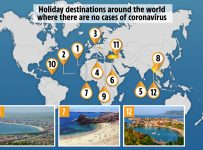 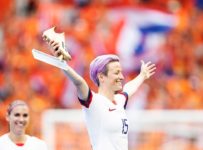