Politics with Amy Walter on the Friday Takeaway.

The fight over redistricting and who gets to wield the pen.

Former Wisconsin Governor and Republican presidential candidate: “I felt, as a Republican, that our reforms work, they worked in Wisconsin, they worked elsewhere across the country”.

On The Takeaway’s Politics with Amy Walter from WNYC and PRI. 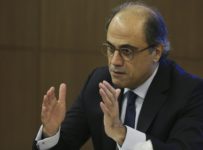