Storms line up in the Pacific Ocean on Saturday, April 6, 2019.(Satellite/NOAA)

A storm from the Pacific Ocean will gain strength and threaten the heartland with high winds, severe thunderstorms and blizzard conditions as it crosses the United States during the middle of this week.

This potent storm is scheduled to arrive in Northern California and southern Oregon early this week.

As this storm crosses the country, it will pack a punch in many areas with strong winds, but there will also be the potential for heavy snow, severe thunderstorms and perhaps even aggravated flooding in some locations.

The high winds with the storm will threaten to break tree limbs, trigger power outages, cause minor property damage and flip over high-profile vehicles. Gusts could top 70 mph in some locations.

At the very least, the storm will significantly impact ground and air travel over a 2,800-mile-long swath from the Pacific coast to the Atlantic coast.

Worst of storm to target central US

While the storm is expected to kick up strong winds across the Desert Southwest and unload snow on the Rocky Mountains, it is forecast to get even stronger as it pushes east of the Rockies and into the Plains.

While it may not be quite as intense as the historic bomb cyclone from the middle of March, another memorable high-wind event is likely to evolve.

A large swath of strong winds with gusts frequenting between 40 and 60 mph is likely to expand from the eastern slopes of the Rockies to the Great Lakes region Wednesday into Thursday.

The strongest winds may blast the central and southern High Plains, where there can be gusts to or past 70 mph. Power outages, dangerous crosswinds and property damage can result.

Farther to the east, winds may be strong enough for a long enough period to push Great Lakes waters onshore and cause lakeshore flooding.

Western US storm to lash deserts with wind, unload snow on Rocky Mountains Tuesday into Wednesday

1st stretch of hot weather this year to grip southwestern US

Why trees topple in high winds

Enough moisture will wrap around the storm to spread a swath of wind-driven rain and snow eastward across the North Central states during the second half of the week.

The potential exists for snow to reach or exceed a foot across either the northern or central Plains, depending on the track of the storm. Blizzard conditions can make travel difficult to impossible if the storm develops to its full potential.

“Snow may also streak well ahead of the main storm center along a narrow swath into the Great Lakes at midweek,” according to AccuWeather Meteorologist Randy Adkins.

The speed of the arrival of Gulf moisture may be a key player in the extent and nature of severe thunderstorms, such as determining whether straight-line wind gusts versus tornadoes are more likely.

There is the potential for enough rain to fall with the storm over a narrow swath to aggravate flooding over parts of the central Plains, including in portions of Nebraska, Iowa and Illinois.

“Even if the heaviest rain avoids the flood disaster areas, cleanup and recovery efforts could still be affected,” according to AccuWeather Meteorologist Alyson Hoegg. “Rain may change to snow, or these areas may face severe thunderstorms if the storm takes a more northerly track. In either case, gusty winds are expected.”

“Well after the storm passes, runoff from the rain or melting snow can prolong or worsen the ongoing river flooding in the Dakotas and along the Mississippi River,” she added.

Storm may be past its peak in the eastern US

While the worst of the storm is likely to affect the Central states, impacts in the Northeast will still range from rain and thunderstorms to gusty winds, some snow and even big temperature swings from one day to the next at the end of the week.

In the Southeast, impacts may be reduced to a single line of showers and gusty thunderstorms.

Keep in mind that, with the storm likely to cause severe travel problems in the heartland, there is the potential for some flight delays and cancellations due to aircraft and crews being displaced.

The big storm in store this week may not be the last of its kind in terms of intensity this April.

The overall weather pattern is looking to be quite dynamic as storms line up over the Pacific Ocean with sights set on the U.S. and southern Canada through much of the month.

“With the jet stream suppressed southward as much as it is now and likely to be in the weeks ahead, the pattern will be busy with storms,” according to AccuWeather Lead Long-Range Meteorologist Paul Pastelok.

“Warmups are likely to be brief, while many areas from the West to the Plains, Midwest and Northeast may experience many more days with below-average temperatures rather than above-average [temperatures] through most of the month,” Pastelok said.

The pattern may also yield outbreaks of severe weather over the Southern states and part of the Midwest. Flooding will also be a concern in these areas.

Download the free AccuWeather app to receive the latest forecast for your area.

Correction: A caption on the satellite loop previously said that the date was March 5, 2019. It has been corrected to reflect that the satellite imagery is from April 5, 2019. 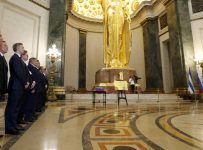