Criminal defense lawyer Giuseppe Rosselli was confused when his client, George Allen, didn’t show up for a court date in late July. They had texted about the hearing moments earlier.

“He [was] on his way to court,” Roselli remembered. “And all the sudden I lost contact with him.”

Roselli was defending Allen against charges stemming from Pittsburgh’s first protest following the death of George Floyd. The May 30 event took place downtown and ended in vandalism and looting. City police accused Allen of throwing a chunk of cinder block through the window of a police truck that had two officers inside.

“And they informed me that … they intercepted [Allen] on his way to court, took him to the FBI,” Rosselli said.

Allen had been charged in federal court, too, where he is now represented by Patrick Nightingale. Nightingale said it “really surprises” him that the feds are trying Allen in a case that involves alleged property destruction and a minor injury to an officer.

“Why Department of Justice would have made the decision to pile on, if you will, with a federal indictment so now Mr. Allen is forced to defend himself both in state court and in federal court for the exact same alleged offense conduct – I can only conclude that this reeks of [U.S. Attorney General] William Barr and pure politics,” the attorney said.

Allen is just one of about a dozen protesters being prosecuted by western Pennsylvania’s U.S. Attorney, Scott Brady. Other federal defendants are accused of setting police cars on fire, throwing objects at police officers and horses, and trying to rob a bank. In Erie, one marcher was charged for allegedly starting a fire at a coffee shop, while another is accused of throwing Molotov cocktails at officers.

Nationally, the feds have made more than 300 arrests related to the protests. Last week, The Wall Street Journal reported that Barr has told government attorneys to be aggressive in charging protesters connected to violence. That report has fueled concerns that Barr is trying to boost President Trump’s reelection. The president has touted the crackdown to rally support among white, older, and suburban voters.

“We are not going to let this get out of hand. And this is not what First Amendment lawful assembly and protest is supposed to be,” he said.

Relatively few local protests this summer led to confrontations between marchers and police. And most of the people Brady’s office is prosecuting are already being tried by the office of Allegheny County District Attorney Stephen Zappala. Zappala said in a statement that it’s “unclear” to him “why the U.S. Attorney would want to focus on local protest cases.”

Pittsburgh City Councilor Corey O’Connor, who chairs council’s public safety committee, noted that local and federal authorities often collaborate on major cases, such as the 2018 Tree of Life synagogue shooting. And agencies at every level of government have worked together to investigate the recent protests.

But O’Connor agreed with his fellow Democrat, Zappala, that the federal prosecutions of demonstrators are confusing.

“That doesn’t seem to make sense or pass the smell test to me,” O’Connor said. “I think that’s a little extreme to go to a federal level when it’s a local crime.”

As an example, he said, “for many years in Philadelphia and other big cities, U.S. Attorney’s offices would prosecute offenses like robberies at convenience stores, things that you would not think would be within the realm of federal authority, although there are clear federal statutes that … make that a crime.”

Antkowiak said the feds might take up such cases if they don’t think local or state officials are being aggressive enough, or if they want to pursue tougher sentences under federal law. Because federal and state court systems are entirely separate, double jeopardy is not a concern. So, Antkowiak said, whether prosecutors bring a case is really a question of what their, or their boss’s, priorities are.

“And in this case, if the Trump Administration has decided that acting against these protests is a priority, that policy decision filters down to all U.S. Attorneys, and they have a mandate to pursue it,” he said. And he added that voters can shape those priorities by going to the polls. 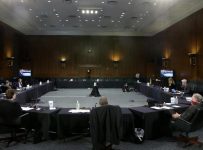