GRAND RAPIDS, Mich. — Remember the term polar vortex? We have heard about it and felt that bitter cold arctic air during plenty of West Michigan winters, but what is a vortex and how does it work??

We hear about the polar vortex time and time again but do we really understand it. This vortex weakens in the summer and strengthens in the winter. It’s basically a large area of low pressure and cold air that always lives at the earth’s poles. The word vortex refers to the counter-clockwise air flow keeping that colder air near the poles. When it weakens we then get those bitter cold temperatures in West Michigan. Today’s science experiment we are going to learn about vortices by making some vortex rings with an air cannon! Here is a list of what you need to get started.

Step 1: take the small plastic bottle and use scissors to cut the bottom off

Step 2: take the balloon and cut the skinny end off

Step 3: take the balloon and stretch it over the bottom part of the bottle

Step 4: take a match, light it, blow it out and drop it in the bottle

Step 5: place your hand over the open end of the bottle and let the smoke build inside

Step 6: once enough smoke builds up gently hit the balloon end of the bottle and watch what happens!

We are creating smoke rings or vortex rings! When we tap on the balloon at the bottom of our bottle we are pushing out a ball of air but it looks a little different and pretty cool! The center of the air in that ball is moving really fast creating lower pressure. On the other hand the air on the circumference of that ball moving out around the rim of the bottle is moving slower creating high pressure. This air moves slower due to the friction when the air touches the rim of the bottle! So we have an area of lower pressure surrounded by an area of high pressure creating air flowing in vortices, which is basically just spinning air. So when we tap the bottle we create a bunch of little vortices that are pushing out from the bottle in the shape of our smoke rings! Not only can we relate this to winter weather with the poral vortex, but we also also see vortices present in winds surrounding tornadoes, tropical cyclones and dust devils. Pretty neat! 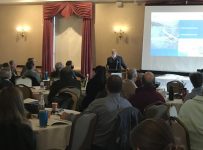 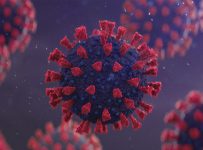