Following is a summary of current science news briefs.

Egypt on Saturday put on show dozens of coffins belonging to priests and clerks from the 26th dynasty nearly 2,500 years ago, with archaeologists saying tens more were found in the vast Saqqara necropolis just days ago. The 59 coffins were discovered in August at the UNESCO world heritage site south of Cairo, buried in three 10-12 meter shafts along with 28 statues of the ancient Egyptian God Seker, one of the most important funerary deities. 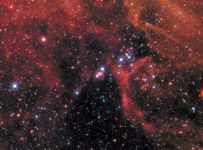