President Trump’s statement that tariffs on China were one of the reasons for the robust 3.2% GDP number for the first quarter is only half right.

GDP growth was driven in part by a big drop in imports, following a surge of imports last year as companies attempted to stock up in advance of tariff deadlines. Usually, imports weigh negatively on GDP, while exports increase it.

A drop in imports from China was a large factor in the first quarter economic growth. But exports to China also declined. The US sells way less to China than it buys from them.

However, a drop in imports isn’t always a good thing, since many imports are used to produce things in America that are then re-exported. Also, tariffs impact the economy in multiple ways, including consumer prices — which have climbed substantially on goods subject to new tariffs — and disruptions to supply chains.

Cumulatively, economists estimate that the tariffs have had a slight negative impact on growth so far, and that impact will increase significantly over the next year if the new 25% tariffs on $200 billion in Chinese imports are not removed.

Companies themselves say that tariffs have been bad for business. Manufacturing purchasing managers indices and hiring have been down since the middle of last year. In the April NABE survey, 75% of economists at goods-producing businesses said the trade war had been a drag on growth. 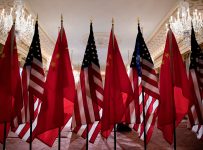