On no obvious catalyst, the winners of 2020 were absolutely hammered on Thursday — a sea of red for the likes of Apple, Microsoft, Tesla
TSLA,

“Stock markets got a well overdue thumping with big tech leading the way south. The technical expression is a downward correction in overbought stocks after an intense period of one-way price action higher,” says Jeffrey Halley, senior market analyst, Asia Pacific, at Oanda. “For the rest of us, the market was long and wrong, and now some of their P&L [profit and loss] is gone.”

A chart from Bespoke Investment Group neatly encapsulates the fact that the winners were sold.

Eddy Elfenbein of the Crossing Wall Street blog says these sorts of days aren’t unusual in the middle of rallies. “Contra-trend rallies are typical within larger rallies, but we can’t say that this spells the end of the superstar stock rally. Clearly, there are nervous investors out there, and the bears have shown they’re willing to push back,” he says.

“While [Thursday’s] massive sell off will cause some white knuckles on the Street as fears of a tech bubble and stretched valuations become the talk of the town, we continue to believe the secular growth themes around the tech sector are unprecedented with the COVID backdrop accelerating growth stories by 1-2 years in some cases,” Ives says. “While much good news has been baked into these names, we view pullbacks like today as opportunities to own the secular growth stories in cloud, cybersecurity, and tech stalwart FAANG names,” he says, with FAANG representing Facebook
FB,
,
Amazon
AMZN,
,
Apple, Netflix
NFLX,

Ives says the second phase of the economic rebound, during the second half of this year and into 2021, will “supercharge” the fundamentals and growth trajectories of well positioned tech stocks. “We view this next phase resulting in Street numbers moving higher and a further rerating of tech stocks as the ‘risk on’ trade and hunt for secular growth stories will be the focus for tech investors looking out as we head into the fall, despite volatility and general nervousness around U.S./China trade tensions and the November elections,” says Ives.

He says investors should focus on Apple
AAPL,

and Microsoft
MSFT,
.
“For Apple, while the services business has been a Rock of Gibraltar for [Chief Executive Tim] Cook & Co., now the drumroll shifts to a massive pent-up demand for smartphone upgrades heading into its iPhone 12 5G supercycle slated to kick off in the early October time-frame,” Ives says. As for Microsoft, “this cloud shift and [work-from-home] dynamic looks here to stay, and the company stands to be a major beneficiary of this trend on its flagship Azure/Office 365 franchise over the coming years,” he says.

The nonfarm payrolls report will be an important measure of how far the economic recovery from the lockdowns has progressed. Economists polled by MarketWatch expect 1.2 million jobs were created in August, including nearly 250,000 temporary Census workers, after growth of 1.76 million in July and 4.79 million in June. The unemployment rate is expected to fall to 9.8%.

“The slower pace is a signal that the U.S. economy is still struggling with COVID-19, which means local restrictions and people staying at home due to fear of catching the virus. We know from other countries that a more solid rebound is not on the cards until the virus gets under control,” says Piet Haines Christiansen, chief analyst at Danske Bank.

Deutsche Bank used this graphic to demonstrate how the currency market may react.

Outside of payrolls, Broadcom
AVGO,

late on Thursday reported stronger-than-forecast earnings, as demand from cloud and telecom customers helped the semiconductor and industrial software maker.

contract was outperforming the Nasdaq-100
NQ00,

a day after the big selloff.

Trees might be able to help locate decaying humans nearby.

Need to Know starts early and is updated until the opening bell, but sign up here to get it delivered once to your email box. The emailed version will be sent out at about 7:30 a.m. Eastern. 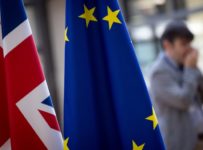