(Sixth Tone) — On a misty winter’s afternoon, about an hour’s drive from the ancient city of Xi’an and a muddy 30-minute trek through the Zhongnan Mountains, we finally reach the secluded Beiji Temple.

The building has clearly seen better days. Beiji Temple was constructed during the Ming dynasty, but most of the original temple was destroyed during the violence of the Cultural Revolution and only the main hall remains today, its tiled rooftop covered with weeds. “On rainy days, mud falls from the ceiling,” says Zhang Shiquan, one of the three Taoist devotees currently residing at the temple.

Not that Zhang’s complaining. Last year, feeling jaded by city life and experiencing heart and weight problems, the nature-loving former salesman came to seek solace at Beiji Temple. There, he met a hermitlike Taoist adept — “a soft speaker and a great listener,” Zhang says — and decided to stay for good. Within three months of moving to the temple, the light, vegetable-rich diet flattened his belly and his introverted personality found an outlet, he claims. Zhang now spends his days learning pottery and reading e-books on a smartphone with no internet connectivity.

In the past decade, thousands of young people like Zhang have come to the Zhongnan Mountains hoping to connect with around 600 modern-day hermits, or “yinshi,” according to estimates by Zhongnan Cottage, a local civic organization. Hermitic lifestyles have a long history in China: During the dynastic era, the term was applied to educated, conscientious men who fled from the social expectation to join what they perceived as a corrupt, immoral government and eked out poor lives in remote rural China. Occasionally, emperors rewarded hermits with high-ranking government positions, believing them to possess deeper wisdom than conventional officials.


The Zhongnan Mountains emerged as a popular retreat during the Tang dynasty due to their location near the then imperial capital, Chang’an. Indeed, so many hermits came here that the phrase “take a Zhongnan shortcut” is still used in Chinese to refer to people who get rapidly promoted to high positions. During the Cultural Revolution — an often-violent political campaign that lasted from 1966 to 1976 — religious sites like Beiji Temple came under attack. When China began allowing foreigners to visit again during the 1980s, it was widely assumed that religious life had been completely eradicated, crushed under the boots of Mao’s Red Guards.

Western researchers were therefore excited to witness the reemergence of many small hermit communities in the early years of the reform era. In 1989, Bill Porter — an American translator of Buddhist texts — published “Road to Heaven,” a best-seller that documented the lives of the Zhongnan Mountains’ Taoist and Buddhist monks and nuns. The book was translated into Chinese in 2001 and proved popular among a domestic readership curious to see their country through the eyes of a foreign visitor. In 2010, a Chinese reader and former Xi’an-based literary editor, Zhang Jianfeng, came to the Zhongnan Mountains, settled in the nearby village of West Cuihua, and founded Zhongnan Cottage — a space for hosting traditional Taoist and Buddhist practices as well as other cultural events.

Zhang Shiquan, the recently converted Taoist devotee, draws a link between the popularity of the hermit lifestyle and disillusionment with China’s fast-paced, capitalist economic development. “In the past, real hermits went somewhere quiet to muse about the world,” Zhang says. “Now, many people come here just because they’re sick of it.”

But today, hermit lifestyles on the Zhongnan Mountains are under threat. Since last summer, a high-profile environmental protection campaign in Shaanxi province has demolished illegally built homes across the Qinling Mountains, where the Zhongnan Mountains are located. Although the hermits were not the original targets, some of their homes and temples were razed as part of the campaign.

“Many hermits in the Zhongnan Mountains rent illegal constructions. On the one hand, it affects the environment,” said Liang Xingyang — the secretary general of a Taoism association in Xi’an’s Chang’an district, which administers the Zhongnan Mountains — in a December interview with Beijing Youth Daily. “On the other hand, there are a lot of safety risks … Many hermits have no (official) place to live, so they come down from the mountains (following the demolitions).”

One person caught in the dragnet was Ma, a 40-something, fast-talking Buddhist convert who declined to give her first name out of concerns that visitors may disturb her after the publication of this article. In 2015, Ma came to the Zhongnan Mountains, where she found a deserted temple with collapsing walls and statues of gods that had been desecrated during the Cultural Revolution, she says. After four months’ work and tens of thousands of yuan, Ma’s new temple was completed, along with an annex of about 12 square meters (129 square feet) in which she lived.

Over the years, Ma says she’s provided shelter for 17 people, most of them curious teenagers wandering on the mountains. “Some kids come here in winter, wearing just one layer and worn shoes. If I see them, I bring them back to my place,” Ma says. Others are not so lucky: Ma’s eyes redden when she recalls a youngster who died after trying to burn wood for warmth in a one-person tent. “You might be destined to meet a good master, or you might be destined to die on the mountains,” she muses.

In 2017, Ma went to Xi’an’s government-backed religious association to register her temple. She tried and failed several times before being told to visit a different department. But Ma’s impatience with the authorities came back to bite her eventually. In July of that year, she received a notice saying that her temple and bungalow would be demolished as part of the campaign against illegal constructions. Three days later, the buildings were torn down.

After the demolition, Ma moved to Beiji Temple. Despite her initial disappointment, she has come to terms with the demise of her ill-fated former home. “It’s an inevitable sacrifice,” she says.

This story was originally published by Sixth Tone. Click here to read the original.

Register to read this article for free. 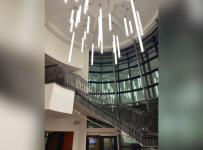