The Latest from the skiing world championships (all times local):

Austrian skier Vincent Kriechmayr is leading the men’s super-G at the world championships after the top 30 racers completed their runs.

Romed Baumann is seven-hundredths of a second behind in second.

Baumann is also Austrian but is competing for the German ski federation and has not been on any super-G podium for more than 10 years.

Lower-ranked skiers were still coming down the course.

Lara Gut-Behrami won the women’s super-G at the world championships.

It’s the Swiss skier’s seventh medal from a major event but first gold.

Shiffrin missed a chance to win gold when she had the fastest split times but got twisted in the lower part of the course. It was the American’s first speed race in 382 days.

The opening race of the worlds took place in sunny but windy conditions after bad weather postponed all events over the last three days.

Lara Gut-Behrami is leading the women’s super-G at the world championships after the top 30 racers have completed their runs.

Swiss teammate Corinne Suter is 0.34 seconds behind in second.

Defending champion Mikaela Shiffrin is 0.47 off the lead in third. The American looked to be on course for gold but got twisted in the lower part of the course and lost more than eight-tenths on Gut-Behrami from the final split.

The opening race of the worlds is taking place in sunny but windy conditions after bad weather postponed all events over the last three days.

Lower-ranked skiers were still coming down the course.

The women’s super-G on a sunbathed Olympia delle Tofane is set to kick off the skiing world championships at 10:45 a.m.

The race is one of four events postponed earlier this week when excessive snow and persistent fog wiped out the program for the first three days.

Marta Bassino will open her home worlds as the Italian starts first.

Defending champion Mikaela Shiffrin will wear bib No. 4 while racing in a speed event for the first time in more than a year.

The men’s super-G is scheduled for 1 p.m. 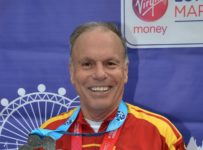