Here’s what to watch on Thursday when the government reports gross domestic product for the first quarter.

Growth in the U.S. economy likely accelerated to an annualized pace of 6.5% in the first three months of 2021, according to economists polled by Dow Jones and The Wall Street Journal. GDP is the sum of all goods and services produced in the U.S., making it the official scorecard of sorts for the economy. The Commerce Department will publish the the data at 8.30 a.m. ET Thursday.

The U.S. expanded at a seemingly fast 4.3% pace in the fourth quarter, but growth flagged toward the end of 2020 after a record explosion of coronavirus cases resulted in renewed restrictions on business and consumer activity.

The U.S. economic rebound began early this year after Americans started to get coronavirus vaccinations in larger numbers. The economy got another big boost from a $1.9 billion of financial aid that was approved in early March.

In normal times, the U.S. economy grows an average of 2% to 2.5% a year. Yet the pandemic has spawned unprecedented ups and downs in the economy.

The government sent out $600 checks in January and $1,400 checks in March to most Americans, so it’s no surprise consumer spending surged in the first quarter. Economists predict outlays jumped almost 10%, compared to just 2.3% in the fourth quarter.

Consumer spending accounts for more than two-thirds of U.S. economic activity and largely explains why the first quarter was so strong.

What also helped were expanded unemployment benefits and a surge in hiring as businesses reopened after lockdowns to combat the pandemic. That put about 1.5 million people back to work in the first quarter.

Companies also got into the act. They hired more people, increased investment and ramped up production in an effort to keep up with rising demand.

Investment in new equipment alone might have topped 9% and the housing market may have been even stronger. Home sales have boomed during the pandemic because of ultra-low interest rates and more people moving out of cities to escape the virus.

The cost of most raw or partly finished materials — lumber to take one example — has soared. And a global shortage of semiconductors hurt automakers and other manufacturers that rely on computerization.

Because manufacturers have been unable to keep up with demand, their stocks of unsold goods or inventories likely declined.

A large chunk of government stimulus spending is expected to show up in GDP. Government outlays may have climbed by almost 10%.

The biggest downer in first-quarter GDP was the nation’s record international trade deficit. The deficit rose sharply in the first three months of the year.

There’s a bit of a silver lining, though. The trade deficit has surged because a stronger U.S. economy has allowed Americans to buy more imported goods such as French wine, Japanese cars or Chinese-produced cell phones.

U.S. exports, on the other hand, have suffered from softer demand by major trading partners whose economies are still weak. Europe, for instance, has imposed fresh lockdowns amid a struggle to vaccinate their populations. 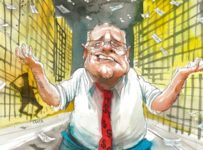 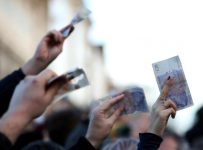