The meeting comes hot on the heels of recent doses of economic data, including a positive gross domestic product reading of 4.1 percent growth in the second quarter.

The Bank of England, meanwhile, announced a rate bump despite qualms over the future of the U.K. economy.

The Monetary Policy Committee voted unanimously for an increase in rates from 0.5 percent to 0.75 percent on the back of a strong labor market and credit growth.

The number of Americans filing for unemployment benefits rose less than expected last week, pointing to sustained strength in the labor market.

Initial claims for state unemployment benefits increased 1,000 to a seasonally adjusted 218,000 for the week ended July 28, the Labor Department said on Thursday. Data for the prior week was unrevised.

On the auctions front, the U.S. Treasury will announce the size of two individual bills, both up for auction next week.

Elsewhere, politics continues to keep market watchers busy. On Wednesday, the U.S. administration announced that President Donald Trump had spoken with U.S. Trade Representative Robert Lighthizer and asked him to consider increasing the proposed levies on $200 billion worth of Chinese goods up to 25 percent, from 10 percent.

Consequently, markets around the world continue to be on edge over what these trade tensions could mean for Washington and Beijing going forward.

Meantime, investors will be keeping a close eye on the yield on the benchmark 10-year Treasury note after it topped 3 percent on Wednesday — the first time it’s reached this level since June. 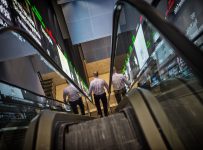