Around the world, people are living longer.

In some countries, progress has not always been smooth. Disease, epidemics and unexpected events are a reminder that ever-longer lives are not a given.

Meanwhile, the deaths that may preoccupy us – from terrorism, war and natural disasters – make up less than 0.5% of all deaths combined.

But across the world, many are still dying too young and from preventable causes.

The story of when people die is really a story of how they die, and how this has changed over time.

Causes of death around the world

This is 10 million more than in 1990, as the global population has increased and people live longer on average.

More than 70% die from non-communicable, chronic diseases. These are not passed from person to person and typically progress slowly.

The biggest single killer is cardiovascular disease, which affects the heart and arteries and is responsible for every third death.

This is twice the rate of cancers – the second leading cause – which account for about one in six of all deaths.

Other non-contagious diseases such as diabetes, certain respiratory diseases and dementia are also near the top of the list.

What may be more shocking is the number of people who still die from preventable causes.

About 1.6 million died from diseases related to diarrhoea in 2017, putting it in the top 10 causes of death. In some countries, it’s one of the largest killers.

Neonatal disorders – the death of a baby within the first 28 days – claimed 1.8 million newborns in 2017.

The frequency of these deaths varies greatly from country to country. In Japan, fewer than one in 1,000 babies die in the first 28 days of life, compared with just under one in 20 in some of the world’s poorest countries.

While many high-income countries have seen significant falls in road deaths in recent decades, globally the number dying on the roads has almost stayed the same.

Meanwhile, almost twice as many people around the world died from suicide as from homicide – the killing of one person by another.

In the UK, suicide deaths were 16 times higher; it is the leading cause of death for men aged 20-40.

What types of death tell us

What people die from changes over time and as their country develops.

In the past, infectious diseases played a bigger part than they do today.

In 1990, one in three deaths resulted from communicable and infectious diseases; by 2017 this had fallen to one in five.

Children are particularly vulnerable to infectious diseases. As recently as the 19th Century, every third child in the world died before the age of five.

Child mortality rates have fallen significantly since then thanks to vaccines and improvements in hygiene, nutrition, healthcare and clean water access.

Child deaths in rich countries are now relatively rare, while the poorest regions today have child mortality rates similar to the UK and Sweden in the first half of the 20th Century, and are continuing to catch up.

The decline in global child deaths is one of the greatest success stories of modern healthcare.

The number of children dying each year has more than halved in recent decades, as we have got better at fighting contagious and infectious diseases.

This has shifted death rates towards non-contagious diseases in elderly people.

Many countries have growing concerns about the increasing burden on relatives and healthcare systems as people get older and have longer-term illnesses.

Unexpected events can throw this steady improvement off course.

The 1980s HIV/Aids crisis is a striking example of this.

The epidemic was felt across all regions of the world, but the most notable impact on life expectancy was in sub-Saharan Africa.

After decades of steady improvement, life expectancy fell substantially across many countries in the region.

A combination of anti-retroviral therapy, treatment and education on prevention means global deaths from Aids-related illness have halved in the last decade alone – from 2 million per year down to 1 million.

Life expectancy has since began to recover in these countries, but is only now returning to pre-crisis levels.

Even in the richest countries, continued progress is not a given.

Life expectancy in the US has fallen slightly over the past few years, largely as a result of the opioid drug crisis.

Life expectancy for new mothers has also not consistently increased.

There are about 10 countries where a young woman today would be more likely to die during or shortly after childbirth than her mother was, including the US.

Today’s overall picture is positive: we are living longer lives while fewer people – especially children – are dying from preventable causes. But it’s also true that we still have a long way to go.

Further improvements in sanitation, hygiene, nutrition, vaccination and basic healthcare are all crucial to this.

So too are increased safety measures and mental health provision.

Understanding what people die from is crucial if we want this recent progress to continue.

This analysis piece was commissioned by the BBC from an expert working for an outside organisation.

Hannah Ritchie is an Oxford Martin fellow, and is currently working as a researcher at OurWorldinData.org. This is a joint project between Oxford Martin and non-profit organisation Global Change Data Lab, which aims to present research on how the world is changing through interactive visualisations. You can follow her on Twitter here. 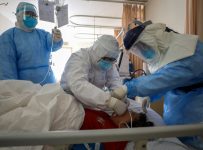