MOSINKI, Botswana (Thomson Reuters Foundation) – Longer and harsher droughts are driving a growing share of Botswana’s traditional cattlemen to give up their animals – but Skanki Mokweba will not budge.

In recent years, the father of 10 has seen most of his herd die from sparse pasture and a lack of drinking water, as climate change brings more extreme weather across southern Africa.

“I used to have 20 cattle. Most have since died. As of last year, I am only left with four,” said Mokweba, who has raised cattle for four decades in southeast Botswana.

Those remaining four now have calves, after lush rains last year, but renewed drought this year has him worried he could lose more animals, he said.

But “I will not stop rearing cattle. Not ever,” insisted Mokweba, who lives on the outskirts of Molepolole, a village northwest of Gaborone, Botswana’s capital.

“Livestock farming is my culture and tradition as a Motswana,” he said.

According to an agricultural census released by Statistics Botswana last year, the country’s estimated cattle population has fallen from 2.5 million in 2011 to 1.7 million in 2015.

In a country where cattle have long been a rural stash of savings, smaller herds affect how families like Mokweba’s feed their children, buy school uniforms, and pay for everything from weddings and to burying the dead.

The loss of cattle also threatens the country’s traditions and culture.

Cattle skins have long been used to produce traditional dance attire for men, women and children, as well as clothing for traditional chiefs.

But Mophato Gabanakgotla, a livestock farmer in the village of Letlhakeng, thinks the answer to harsher grazing conditions in Botswana is not fewer cattle but better feed.

Gabanakgotla, who lost 22 of his 35 cattle to drought, mostly in 2016, and saw another nine stolen, hopes to begin growing labab, a sturdy legume also known as hyacinth bean that works well as cattle fodder.

The plant has been grown successfully in the north of the country, helping farmers there cope with poor grazing and avoid paying high prices for scarce animal fodder.

“I have 21 hectares of farmland that is not producing any crops due to limited rains and excessive heat. I want to fence it and grow lablab to feed my cattle and then sell access” to others for grazing, Gabanakgotla said.

Stephen Pillar, vice chairman of the Totume Farmers’ Association, has been growing the legume for 14 years and said it can produce a crop even in the bad years, though it produces much more in good ones.

“I started growing lablab because I wanted to save my cattle from droughts. When I realized that it performed way better than my maize and sorghum crops with normal to below normal rains, I began growing it commercially on 70 hectares,” he said.

Now, when the rains come late, or not at all, he still earns a living – and demand is growing fast, he said.

“Beef and dairy farmers buy from me. Some cattle farmers now want to sign contracts with me so I farm for them alone as all my feed gets sold out,” he said.

He is now thinking of expanding to 600 hectares of production, taking advantage of a half-price government subsidy on the purchase of lablab seeds.

“All the farmers in my association are growing lablab now. None of them are ever stuck with unsold fodder,” he said.

Botswana these days earns 70 percent of its earnings from diamond exports, not agriculture, which today produces less than 3 percent of GDP.

But livestock still accounts for 80 percent of the southern African country’s agricultural earnings, and Boikhutso Rabasha, a spokeswoman for the Ministry of Agriculture, said she worries about the country’s continuing ability to produce enough beef.

Beef exports from Botswana have been declining for the past 35 years, she said.

For now, Mokweba continues the dusty 3 km walk each day with his cattle to the nearest water trough, where he pays $2 per month for each animal to drink.

The heat is ever more intense, he said, and the parched grass crunching underfoot so sparse it is hardly even noticeable anymore.

But he is far from ready to give up, says the farmer, clad in old white Botswana Meat Commission overalls and a matching cotton hat.

Raising cattle “is the only source of livelihood I have ever known. What else can I be?” he asked. 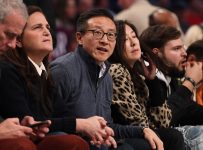