Members of an ad hoc committee tasked with creating bylaws for the committee attended the meeting, during which there was both in-person and call-in participation. Scott Barber, senior pastor at Grace Community Church in Worthington, gave initial remarks about the ad hoc committee’s efforts and what he hoped a cross cultural advisory committee could accomplish.

“I think this is a significant step in our community,” Barber told council members. “It serves to take policy and services issues … and communicate those to members of our community, and facilitate communication from the community to the city as well.”

Barber cited the upcoming change to the city’s flood plain as one example in which a cross cultural advisory committee (CCAC) could assist in disseminating important information to a segment of the public that ordinarily may not be aware of such a matter.

Cheniqua Johnson, who currently serves as a honorary member of the city council as well as on the ad hoc committee, had expressed concerns in a council meeting last month that language gaps may result in many Worthington residents not being informed about the new flood plain map.

“The purpose of the CCAC shall be to advise the city council on their community engagement practices and recommendations on cross cultural, and culturally competent community outreach and communication to and from our ethnically diverse community members of Worthington,” reads the purpose section of a draft of the CCAC bylaws shared Wednesday. “The CCAC will also assist in improving the cultural competence of the city of Worthington leadership, policy, practices and services.”

The committee’s bylaws note that the group would consist of nine members, including one representative of the city council. A high school or college student could also be an at-large member of the CCAC, while a city of Worthington staff person would serve as an ex-officio member.

Language in the bylaws — regarding attendance at committee meetings, among other areas — came under some scrutiny Wednesday, and ad hoc committee members agreed to consider changes. A list of potential CCAC members will also be prepared for consideration by the city council, and it’s hoped that formal action can be taken during the council’s Dec. 14 meeting.

“This is so needed,” Councilman Chad Cummings said of the new committee. “We need the real voices of the different cultures that are in this community. I think we’ve been missing that for quite some time.”

Worthington Mayor Mike Kuhle also hailed the creation of a CCAC as “long overdue,” but also urged a degree of caution.

“I don’t want to see this committee get in conflict with the city council.” Kuhle said. “What if this committee does some type of media campaign or ad that city council members don’t agree with? Is there any kind of check and balance?”

Kuhle’s comments brought an emotional response from Johnson, who said the effort to form a CCAC represents an urgent need “to start somewhere” and that she’s bothered by a negative perception that comes about as a result of the community activism of her and others.

“I appreciate your passion very much,” Kuhle answered, adding his hope that any activism be “for our whole community.”

Earlier in the meeting, Worthington City Administrator Steve Robinson said membership of the CCAC “took up a lot of discussion” during ad hoc committee meetings, and that it was important for the CCAC to be an advisory committee in the same way that other such committees are.

Individuals who have served on the ad hoc committee along with Barber, Johnson and Robinson are Worthington City Councilwoman Amy Ernst and Worthington residents McNay Nkashama and Andrea Duarte-Alonso.

Also during Wednesday’s council meeting, council members agreed that its 2021 proposed city tax levy, which represents a 4% increase over 2020, would not be altered in advance of its final certification next month. The 4% figure had been approved back in September.

“There’s not a lot of fluff in this budget,” Ernst said, in reference to the lack of cuts that she and others felt could be made at this point.

Cummings suggested city department heads be asked what specific types of budget increases they would request “if the world was right in their mind” to see what types of important needs may need to be met.

“We’re always asking ‘How low can we get it?’” Cummings said.

Brief presentations on the street lighting, storm water and Worthington Municipal Liquor Store budgets were also presented, with liquor store manager Dan Wycoff noting that sales have been particularly strong in 2020. Robinson subsequently pointed out that since the new Ryan’s Road location opened in July 2018, sales have grown consistently ($4.1 million in 2018, $4.4 million in 2019, and a projected $5 million in 2020). 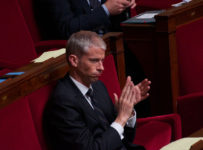