YouTube global head of learning Malik Ducard was explaining why he was standing under the U.S. Space & Rocket Center’s National Landmark Saturn V rocket in Huntsville Saturday night. “When we heard about it,” Ducard said, “we said, ‘We can’t not be there.’”

“It” was the world’s first ThinkerCon, a festival starring dozens of YouTube’s star educators with a combined total of more than 100 million global fans. Underwritten by YouTube, the weekend event quickly sold out its 1,000 tickets and had attendees lined up outside the rocket center an hour before opening Saturday night.

“They’re letting us get together and celebrate educational content online,” Sandlin said of YouTube. “This is the kind of stuff you can do with YouTube. You can make the world better.”

Ducard and Sandlin spoke to reporters under the Saturn V before the event began. The massive rocket brought a word to mind, Ducard said. “Audaciousness.” He called it “a marvel of science (and) so much of it came from this town.”

YouTube has just announced a $20 million investment in the educational content hosted on its platform. “We want to make sure people can find it and educators can get connected to the learners more quickly,” he said. “We also want to lean in and support (creators) with more events (like ThinkerCon) and more resources such as boot camps for up and coming creators with basic tips on things like lighting and editing.”

ThinkerCon was a “global event,” Sandlin said. It sold out quickly, and people flew in from as far Denmark for its panel discussions and science demonstrations. “Something of this magnitude on the entertainment side would be held in New York or L.A.,” Sandlin said. “All of that here in Huntsville signifies that we care about smart stuff.” 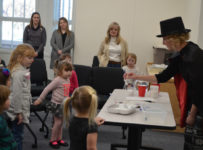